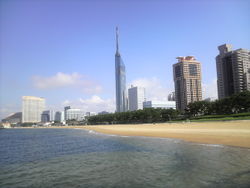 Momochihama District, one of the coastal areas of Fukuoka, with the Fukuoka Tower as a prominent landmark

Fukuoka  (福岡市,   Fukuoka-shi) is the capital city of Fukuoka Prefecture and is situated on the northern shore of the island of Kyushu in Japan. 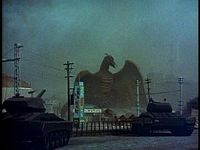 After Rodan flew out of his nest at Mount Aso and destroyed Saikai Bridge, the monster flew over Fukuoka, with the sonic waves created in its wake tearing apart the buildings below. Rodan landed in Fukuoka and flapped its wings, causing the entire city to be pulled apart by the supersonic winds. Fires spread, and the JSDF attempted in vain to fight the creature off. However, the men and machines that attacked Rodan were simply blown away by the powerful gusts. Just when it seemed things couldn't get worse, the JSDF reported that another Rodan had been spotted heading towards the city, explaining the multiple spread-out sightings of Rodan earlier. The other Rodan landed in the city and the two monsters completely devastated it. With the city in ruins and the defense forces in shambles, the two Rodans flew back to their nest at Mt. Aso.

Due to Fukuoka's presence as a major port, large amounts of carbon-rich materials such as coal and diamonds were often present in the city. Dogora, a recently-discovered species of alien, consumes carbon as its primary food source, and thus appeared from the sky during a huge thunderstorm to feed on whatever carbon materials it could find. Sucking up massive amounts of coal, Dogora found resistance from the JSDF, but humanity's weapons seemed only to irritate it. Dogora grabbed, lifted and then hurled a bridge at the JSDF before leaving the city in turmoil.

Fukuoka is one of the locations that King Ghidorah goes to after being unleashed by the Futurians. He attacks the city with his Gravity Beams, and then flies past Fukuoka Tower's top floor, shattering the windows.

SpaceGodzilla lands in Fukuoka after imprisoning LittleGodzilla on Birth Island, and immediately sets about transforming the city into his new crystal palace. He places a source of energy into Fukuoka Tower, and waits for Godzilla and MOGUERA to arrive. The Kaiju and the Mecha battle, but Godzilla and MOGUERA are held back from doing any real damage because Fukuoka Tower's energy kept reviving SpaceGodzilla. Deciding to destroy the tower, they then begin to gain the upper hand, and ultimately Godzilla is victorious after destroying SpaceGodzilla with his Red Spiral Ray, although MOGUERA is damaged beyond repair as well.

Gamera approaches the Fukuoka Dome in Gamera: Guardian of the Universe

After being instructed by the government to find a way to capture the giant Gyaos creatures spotted off the coast of Japan, ornithologist Mayumi Nagamine organized a plan to lure the Gyaos to the Fukuoka Dome using helicopters and hunks of raw meat laced with tranquilizers. All three Gyaos were guided to the dome and then descended to feed on the meat. When the roof began to be closed, one Gyaos flew out and escaped, though the other two were subdued and placed in cages. As the Gyaos tried to fly out over the ocean, it was suddenly swatted down by Gamera into a refinery and destroyed. Gamera made his way through Fukuoka and approached the dome. The two Gyaos inside awakened and escaped from their cages by using their sonic beams, then flew out of the dome. Gamera then retracted into his shell and flew into the sky after the Gyaos, leaving the dome and much of the city of Fukuoka badly damaged.


↑ back to top ・ contents
Retrieved from "http://wikizilla.org/w/index.php?title=Fukuoka&oldid=139781"
Categories: