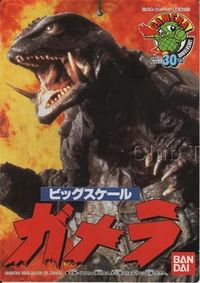 Gamera (ガメラ,   Gamera) is a toy line produced by Bandai from 1990 to 1995. It includes mainly eight-inch figures of Gamera and his foes from the Showa era, as well as figures for the film Gamera: Guardian of the Universe. It also includes a mini-figure set and a foot-tall Gamera figure.

The eight-inch figures Bandai produced from 1990 to 1993 include Gamera, Gyaos, Barugon, Zigra, Guiron, Jiger, and Viras.[1]

Gamera: Guardian of the Universe Figures

In 1995, Bandai produced two figures for that year's film, Gamera: Guardian of the Universe. They are Gamera 1995 and Super Gyaos.

The Gamera Carnival Set was released in 1995 to coincide with Gamera: Guardian of the Universe. It includes seven figures: Gamera, Super Gyaos, Barugon, Viras, Guiron, Jiger, and Zigra, and a Tokyo Tower.[2]

In 1995, in celebration of Gamera's 30th anniversary, Bandai released a giant foot-tall figure of Gamera from Gamera: Guardian of the Universe.[3]

This is a list of references for Gamera (Bandai Japan Toy Line). These citations are used to identify the reliable sources on which this article is based. These references appear inside articles in the form of superscript numbers, which look like this: [1]

↑ back to top ・ contents
Retrieved from "http://wikizilla.org/w/index.php?title=Gamera_(Bandai_Japan_Toy_Line)&oldid=127803"
Categories: