Godzilla vs. Hedorah (ゴジラ対ヘドラ,   Gojira Tai Hedora, lit. Godzilla Against Hedorah) is a 1971 tokusatsu kaiju film produced by Toho, and the eleventh installment in the Godzilla series as well as the Showa series. The film was released to Japanese theaters on July 24, 1971.[3]

The movie starts out with a long shot of polluted water where Hedorah rises slowly, the title shows onscreen. Credits roll with shots of sludge and garbage floating past on the water mixed with images of a woman singing "Save the Earth" in Japanese. We then come to the home of the Yano family, consisting of Dr. Toru Yano, a marine biologist, his wife, Toshie, and his son, Ken. A fisherman comes to their house with a large black-colored tadpole-esque fish. A friend of the Yano's, Ken, the Doctor, and the fisherman agree it couldn't be a tadpole for a few reasons (Size, area where it was found, color, etc.). The doctor asks where the fisherman caught it, and he said it was down where he normally went shrimping, saying it was strange he didn't get any. As the family and their friend are eating. a news report comes on about a large creature, similar to the fish they found, attacking two boats, destroying them. One theory put out was that it was a military weapon. A clear photo of the creature comes onscreen in the report. Ken exclaims it was the same as the fish the man brought earlier. They travel down to where the fish was caught in Suruga Bay, the doctor in scuba gear, the boy with a knife and pail. The doctor tells his son he'll be back in thirty minutes and dives in. Dr. Yano swims around for a while without finding anything other than garbage on the bottom of the water. As Ken cracks open oysters attached to the rocks in the water, finding nothing, the creature causes a wave to crash into him as it is swimming toward him. He holds his knife up in the air as it jumps above him, creating a large gash in its underbelly. It swims off, leaving Ken on the rocks, calling out to his father. The doctor soon sees the creature, it goes toward him and burns his face with acid. He is brought back home later on, having been treated for burns. In an interview with the press, they discuss the two creatures (as the one that attacked Ken and Dr. Yano was much smaller), Ken refers to them as "Hedorahs", however the name appears to catch on. They discuss how both of the Hedorahs were found in polluted water. Another news report states three more tankers were taken down by the larger of the two. A crude cartoon of a green-colored Hedorah drinking oil from the tankers among hundreds of dead fish is shown. In the background, smoke billows from several chimney stacks.

Hedorah then appears in land form, and begins to feed on pollution from a factory. Godzilla appears and attacks Hedorah, only to find out that the monster is immune to his heat ray. Hedorah then retreats back to the ocean with Godzilla on his tail.

Ken is at an amusement park and rides on the roller coaster when he spots Godzilla. Hedorah, now in flying form, appears and attacks the city. Meanwhile, Dr. Yano studies Hedorah's blood to find sulfur. He realizes that Hedorah can only be defeated by high temperatures, and kills the small Hedorah he had locked in his lab by electrocuting it. The army is notified of this weakness, and proceeds to build a machine to kill Hedorah at Mount Fuji.

Ken goes to a party at Mount Fuji where Hedorah attacks. Godzilla attacks Hedorah, but it changes to its final form. Hedorah then defeats Godzilla, and the humans at the party begin to throw fire at it. Hedorah is about to kill them, but Godzilla intervenes. Godzilla fights valiantly, but is once again defeated by Hedorah, with the power lines getting destroyed in the process. The army lures Hedorah to the weapon, only to find out that they do not have power. Godzilla grabs Hedorah and activates the weapon with his heat ray, frying him. He removes two white spheres from Hedorah and destroys them. The weakened Hedorah tries to fly away, but Godzilla flies after him. Hedorah returns to land form, and is drug back to the weapon by Godzilla. Godzilla activates the weapon again and finally kills Hedorah. Ken says his goodbyes to Godzilla as he heads back to the sea. 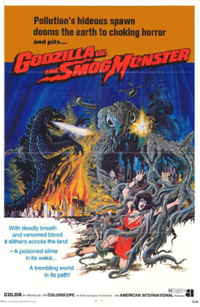 Godzilla vs. Hedorah was released theatrically in the United States in February 1972 by American International Pictures, under the title Godzilla vs. the Smog Monster. It was dubbed into English by Titan Productions, in the company's last work on a Godzilla film.[1] No footage was cut or replaced, apart from shots of Japanese text. Notably, the anti-pollution song which reappears throughout the film, "Return the Sun!", was replaced by a new version with English lyrics called "Save the Earth," written by Adryan Russ and Guy Hemric and performed by Russ.[1] The AIP version of the film is only available on VHS and LaserDisc.

Godzilla vs. the Smog Monster was initially rated PG by the MPAA, but re-rated G despite the unusual amount of on-screen death for a kaiju film.[4] When TriStar Pictures released the international version of the film on DVD, it was rated PG once more. The film does not appear to have been widely released as a double feature, though 103 theaters in the New York City area paired it with Frogs and five Houston theaters with Yog, Monster from Space.[5][6]

Toho also commissioned an international English dub from a company in Hong Kong, which went unreleased in English speaking territories until the Sci-Fi Channel aired it on January 20, 1996. It has since been included on the DVD and Blu-ray releases by Power Multimedia, TriStar Pictures, Madman Entertainment, and Kraken Releasing. In this dub, voice actor Chris Hilton voiced Haruo Suzuki's temperamental JSDF officer and Barry Haigh voiced Yukio Keuchi.[7][8]

Godzilla vs. Hedorah was the main feature of the 1971 Summer Toho Champion Film Festival, alongside an edited version of episodes 5 and 6 of The Return of Ultraman, simply titled The Return of Ultraman, and various cartoons. It recorded 1,740,000 admissions, grossing ¥300,000,000 against a budget of ¥90,000,000. It was Toho's second-highest earner in 1971, and fifth among Japanese films overall.[9]

Godzilla vs. Hedorah was panned by the few Japanese critics who reviewed it, with the exception of the Yomiuri Shimbun.[10] It was mentioned in passing by New York Times critic Vincent Canby in his review of Frogs, with Godzilla described as "a sort of Japanese Smokey the Bear... looking as embarrassed and pious as an elderly clergyman at a charity masquerade ball."[11] Writing for the British Monthly Film Bulletin, David McGillivray remarked that, "Times certainly have changed since the days when Godzilla was an "X" certified Thing bent on destroying Tokyo. Today he is a comic figure (with his own signature tune) obligated to save mankind from destroying itself by way of water and atmospheric pollution."[12] He concluded by saying, "[T]here is scarcely a minute when the monsters are not exploding something or other with their death rays. Eight-five minutes of such excess is a little wearying, although one has to admire Toho's public-spirited enthusiasm." Boxoffice, in its Review Digest, simply rated the film "good."[13]

Among genre fans, Godzilla vs. Hedorah has long sparked divisive opinions, though they are generally more favorable now than in past decades. In G-Fan's reader surveys, its rating has consistently risen, from 5.81 in 1996 (18th out of 22 Godzilla films) to 7 in 2014 (19th of 29). Praise for the movie tends to focus on its experimental style, powerful anti-pollution message, and Hedorah's strength as a villain, while criticism targets the frequent shifts in tone, Riichiro Manabe's score, and, most prominently, the decision to make Godzilla fly. Scott Ashlin, writing for the website 10,000 Misspent Hours, encapsulates those mixed opinions: "I’m not sure I’ve seen such an intractable tangle of the laugh-out-loud stupid and the chills-up-the-spine disturbing in one movie, ever. Yeah, this is the flick in which Godzilla flies by using his atomic breath as a jet engine, but it’s also the one in which entire crowds of extras melt away into muddy skeletons as Hedorah flies overhead."[14]

Steve Ryfle thought poorly of the way the film's message was presented, saying, "The problem is that its treatment of pollution is visually didactic and dramatically childish... the issue of pollution is reduced to terms a child can understand (a monster) and its root causes are never discussed, making it hard to take the picture seriously."[15] David Kalat notes the film's many parallels with the original Godzilla - the on-screen suffering of civilians, Dr. Yano's damaged eye, fish killed by chemicals in a tank, Hedorah's ambiguous demise, and an allegorical monster who "embodies and symbolizes humanity's poison (industrial pollution) without assigning responsibility to any one person or group."[16] Godzilla, no longer the villain, also departs from the role of heroic kaiju in many of Toho's 1960's films, as he is "not recruited by any human interest group. In fact, Godzilla saves the human race only as a side effect of battling Hedorah, which Godzilla does for his own reasons. Godzilla acts as a free agent, motivated by his own agenda. Hedorah threatens the world, so Godzilla acts to save it." The film is, in his estimation, "a cynical, depressing picture with no real hope for the future. The authorities are stupid and incompetent, and the counter-cultural youth movement is also stupid and incompetent. Industry, which caused the problem in the first place, makes no effort to redress their wrongs."

On his blog, artist Matt Frank suggests that Banno's documentarian background should be taken into account when considering the film's unique style: "The various animated segments call to mind the chapter-breaks in a documentary. The other cutaways and non sequiturs, such as the television interview, the collage of people shouting (not to mention the baby submerged in sludge) all remind me of something you’d see in a Michael Moore-style production highlighting the effect of pollution and the public’s call to action."[17]

This is a list of references for Godzilla vs. Hedorah. These citations are used to identify the reliable sources on which this article is based. These references appear inside articles in the form of superscript numbers, which look like this: [1]

↑ back to top ・ contents
Retrieved from "http://wikizilla.org/w/index.php?title=Godzilla_vs._Hedorah&oldid=125142"
Categories: