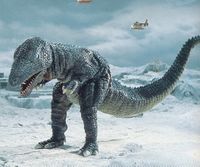 Aside from the usual tooth and claw, Gorosaurus has been noted for using a "kangaroo kick" against foes like King Kong and King Ghidorah. This is Gorosaurus' most popular trait.

↑ back to top ・ contents
Retrieved from "http://wikizilla.org/w/index.php?title=Gorosaurus&oldid=76905"
Categories: