The origin of Gorosaurus' name is not entirely known, though the "-saurus" part of his name, a common component of the names of dinosaurs and other prehistoric reptiles, comes from the Greek word sauros, meaning "lizard." Gorosaurus goes unnamed in King Kong Escapes, and his name is only spoken onscreen in his second appearance in Destroy All Monsters. The Gorosaurus from Destroy All Monsters is sometimes designated in official books as Second Generation Gorosaurus (二代目ゴロザウルス,   Nidaime Gorozaurusu).[8][9]

Nobuyuki Yasumaru modeled the Gorosaurus suit himself after consulting chief artist Yasuyuki Inoue, aiming for it to feel like a living creature.[5] Yasumaru created a prototype of the monster's head with water clay. A balloon was placed inside the suit to create its throat movements. As the head became heavy from the mechanism used to open and close the mouth, the head was attached to a piano wire during filming. Die-cut latex mixed with sawdust was applied over its skin to achieve a sense of hardness and mass.[5]

Gorosaurus' design pays homage to the meat-eater which appears in the original King Kong.[5] As such, the dinosaur stands upright with his tail dragging on the ground, and possesses a large head, muscular legs and short arms. The monster's skin is covered in thick, scaly bumps, and he sports a spike on the tip of his tail. In King Kong Escapes, Gorosaurus' skin is mostly blue in color, while his chin is red that fades into a lighter desaturated yellow in the underside of his tail and belly. In Destroy All Monsters, Gorosaurus' coloration is more muted. His skin now appears more gray, with the red coloration on his chin being much less visible. His underside remains a light tan color, which may appear yellow in some instances.

Gorosaurus is a carnivorous descendant of the dinosaur genus Allosaurus, which lived during the late Jurassic period approximately 155 to 150 million years ago. The Gorosaurus in King Kong Escapes was living on Mondo Island in the modern day, while the incarnation from Destroy All Monsters was one of the various monsters contained on Monsterland at the end of the 20th century.

The Gorosaurus in Go! Godman has similar origins to the one from King Kong Escapes, being a prehistoric dinosaur who originates from Mondo Island.[10] 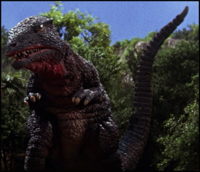 Gorosaurus demonstrates a fair deal of physical strength, holding his own in battle with both King Kong and King Ghidorah. He prefers to fight primarily by biting his foes.

Gorosaurus is able to use his tail to perform jumps as high as 30 meters.[7]

Aside from the usual tooth and claw, Gorosaurus has been noted for using a Kangaroo Kick (カンガルー・キック,   Kangarū Kikku)[11] against foes like King Kong and King Ghidorah. This is arguably Gorosaurus' most well-known trait.

Gorosaurus appeared in Paris after the city was destroyed by Godzilla. He was killed in December 2039 by the combined efforts of G-Force and the Bilusaludo.[12]

↑ back to top ・ contents
Retrieved from "http://wikizilla.org/w/index.php?title=Gorosaurus&oldid=98168"
Categories: