Difference between revisions of "King Ghidorah/Heisei"

The "Ghidorah" part of King Ghidorah's name comes from the Japanese word for "hydra" (ヒドラ,   Hidora), which is spelled very similarly to the Japanese katakana for Ghidorah.

Initially, Toho' international department gave this incarnation of King Ghidorah the English name "KingGhidora," though this would later be corrected to the monster's official English name. When TriStar released Godzilla vs. King Ghidorah on VHS in the United States, it spelled his name as "King Ghidora" on the cover.[4]

The Heisei King Ghidorah is incredibly violent and destructive, but is completely under the control of the Futurians, who are commanding him to destroy Japan. When the Futurians' mind control is severed, he attacks Godzilla under his own free will, though this may only be in self-defense. King Ghidorah attempts to retreat shortly after Godzilla severs his middle head.

King Ghidorah is part of a scheme by a group of time traveling terrorists from the year 2204, dubbed the Futurians, to destroy Japan in the past and prevent it from becoming a global superpower in the future. The Futurians traveled back to Lagos Island in the year 1944 and left behind three genetically-engineered creatures called Dorats. In 1954, the Dorats were exposed to the Castle Bravo hydrogen bomb test conducted at nearby Bikini Atoll, which mutated and merged them together into King Ghidorah. The Futurians then took control of King Ghidorah in the year 1992, directing him to destroy the major cities of Japan.

According to both the novelization of Godzilla vs. King Ghidorah and an earlier script, the Dorats were engineered using DNA recovered from the corpse of another King Ghidorah found on the surface of Venus. While this is never addressed or alluded to in the film itself, it raises the possibility that if this scenario applies to the film, King Ghidorah is actually an alien creature like the Showa incarnation, and the monster featured in the film is a clone of him.

Planning to destroy Japan in the past and prevent it from becoming a corrupt economic superpower by the 23rd century, a group of time-traveling terrorists known as the Futurians traveled to 1992 Japan and claimed that Godzilla would return to destroy Japan in the near future, rendering the nation uninhabitable in the future. The Futurians assembled a team of Japanese citizens and traveled to Lagos Island in 1944, where it was believed a Godzillasaurus would later be exposed to the Castle Bravo H-bomb test conducted at nearby Bikini Atoll in 1954 and transform into Godzilla. The Futurians teleported the Godzillasaurus to the Bering Sea, where they believed it would die, and in its place secretly left behind three genetically-engineered creatures called Dorats. In 1954, the Dorats were exposed to the H-bomb test and merged together into King Ghidorah, who was taken control of by the Futurians in 1992 and unleashed against Japan.

King Ghidorah first attacked Fukuoka, tearing the metropolis apart with his gravity beams. The Futurians demanded that the Japanese government surrender to them and follow their demands for rebuilding the country. The government, unwilling to comply, sent a nuclear submarine owned by a private corporation to the Bering Sea, believing the Godzillasaurus was still dormant there and could be transformed into a new Godzilla by the sub's torpedos. Instead, the sub was intercepted en route by Godzilla, who was never actually erased from the timeline in the first place. Godzilla fed on the submarine's radiation, curing his Anti-Nuclear Energy Bacteria infection and causing him to grow to 100 meters in height. Godzilla came ashore in Hokkaido, much to the Futurians' irritation. The Futurians sent King Ghidorah to kill Godzilla, and the two titans battled near Hokkaido. King Ghidorah seemed to have the upper hand, until Emmy Kano and her android M11, defectors from the Futurians, assaulted their comrades' ship MOTHER and destroyed the computer controlling King Ghidorah. King Ghidorah was stunned, allowing Godzilla to knock him to the ground and sever his central head with his spiral breath. Emmy used MOTHER's subship KIDS to teleport MOTHER in front of Godzilla, who promptly destroyed it with his atomic breath. King Ghidorah tried to fly away, but Godzilla blasted out his wings with his atomic breath and caused him to fall into the North Sea. The empowered Godzilla began a new rampage across Japan, leaving the nation helpless. Emmy believed that King Ghidorah could be revived with technology from her time so long as his corpse was preserved by the cold water, and traveled back to 2204 in KIDS. 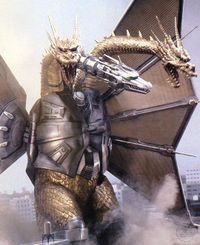 King Ghidorah can fly at speeds up to Mach 4 by flapping his wings. King Ghidorah is very maneuverable while in the air, allowing him to evade and destroy several of the JSDF's fighter jets.

The Heisei King Ghidorah retains the character's trademark yellow gravity beams that he fires from his mouths. The beams are extremely powerful, easily leveling city blocks and even causing Godzilla visible pain.

King Ghidorah can produce powerful hurricane-force winds by flapping his wings. He can also use his wings like a defensive shield to block Godzilla's atomic breath.

King Ghidorah constricts his necks around Godzilla in an attempt to strangle him, causing him to foam at the mouth.

King Ghidorah is highly durable and resistant to damage. He is immune to conventional weaponry, and even withstands point-blank blasts from Godzilla's atomic breath. Later in the film, he survives having his middle head decapitated and his wings shredded, and remains alive but comatose for over 200 years laying on the sea floor. 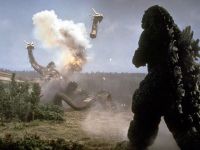 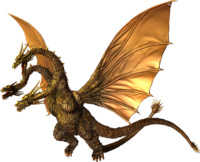 The Heisei incarnation of King Ghidorah appears in both the PlayStation 3 and 4 versions of Godzilla. Though he possesses the design, roar and abilities of the Heisei King Ghidorah, he is said to be an evil alien monster, like his Showa and 1998 incarnations. King Ghidorah appears as a boss on multiple levels, and an ending boss on the final level of some paths. King Ghidorah is one of the most powerful kaiju in the game. He attacks using his gravity beams, flying kick and melee attacks. He will approach Godzilla quickly by flying through the air and firing his gravity beams. He is a playable character in the PS4 version, which also features Mecha-King Ghidorah.

For Godzilla vs. King Ghidorah, Toho decided to give King Ghidorah a new roar rather than reuse his cackling roar from the Showa series. For King Ghidorah's new roar, Toho modified Rodan's roar to sound more dragon-like and metallic by multi-tuning it in both high and low pitches. This version of King Ghidorah's roar was modified and reused for his incarnation in Rebirth of Mothra III.

This is a list of references for King Ghidorah/Heisei. These citations are used to identify the reliable sources on which this article is based. These references appear inside articles in the form of superscript numbers, which look like this: [1]

↑ back to top ・ contents
Retrieved from "http://wikizilla.org/w/index.php?title=King_Ghidorah/Heisei&oldid=89296"
Categories: