Appearing in four films and a television series, it has the most onscreen appearances of any King Ghidorah incarnation.

King Ghidorah is an evil destructive space monster, and is said to destroy entire planets simply for his own amusement.[1][2] King Ghidorah destroyed Venus' entire civilization thousands of years ago, and attempted to do the same to Earth, only to be thwarted by the planet's monsters. In subsequent films, King Ghidorah was the pawn of various invading alien races who used him as a living weapon of mass destruction to attempt to conquer the Earth. Whenever his alien masters' mind control is severed or interrupted, King Ghidorah tends to become confused and easily overwhelmed by his enemies, forcing him to retreat. King Ghidorah does collaborate with Gigan briefly in Godzilla vs. Gigan without being under mind control, and the two kaiju seem to argue and strike each other in annoyance as they try to kill Godzilla and Anguirus. 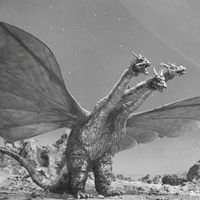 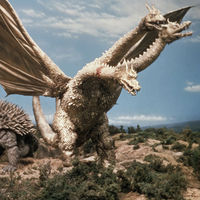 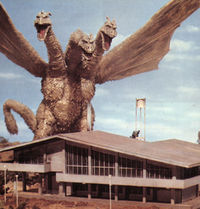 King Ghidorah is able to fly up to speeds of mach 3 in the Earth's atmosphere by flapping his gigantic wings. He exceeds this speed and reaches a speed of mach 400 while flying through space. In Ghidorah, the Three-Headed Monster King Ghidorah can encase himself within a meteorite while traveling from planet to planet. In Godzilla vs. Gigan he encases himself in a large diamond-like structure while traveling through space.

↑ back to top ・ contents
Retrieved from "http://wikizilla.org/w/index.php?title=King_Ghidorah/Showa&oldid=57271"
Categories: