The MonsterVerse Mothra (モスラ,   Mosura) is an incarnation of Mothra that first appeared in a cave painting in the post-credits scene for the 2017 Legendary Pictures film, Kong: Skull Island, and is set to make her debut in the upcoming 2019 film, Godzilla: King of the Monsters.

This will be the first incarnation of Mothra to appear in an American-made film.

The MonsterVerse Mothra has so far only been depicted in cave paintings. Mothra possesses long, thin legs and long wings.

Mothra's origins are currently unclear, but she is assumed to be some sort of ancient creature, due to being depicted in what appears to be an ancient cave painting. Mothra is shown surrounded by worshipers in the painting, suggesting that she is perceived to be a deity by some. This is supported by the discovery of her cocoon within an ancient temple in China known as the "Temple of the Moth."[2] According to Monarch, Mothra appears in ancient folklore and fairy tales from across the world.[1]

After their adventure on Skull Island, Monarch members Houston Brooks and Lin San showed James Conrad and Mason Weaver a cave painting of Mothra, along with paintings depicting Godzilla, Rodan and King Ghidorah, as proof that the inhabitants of Skull Island were not the only monsters in the world. Mothra was entirely white in color and surrounded by worshipers in her painting. 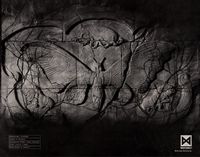 A carving of Mothra from her temple in China

Mothra was confirmed to be appearing in Godzilla: King of the Monsters, along with Rodan and King Ghidorah, on July 26, 2014.[3] A Monarch timeline video uploaded to Kong: Skull Island social media accounts describes a giant cocoon with a "quickening heartbeat" discovered by Monarch in China's Yunnan province, within an ancient structure called the Temple of the Moth.[2] 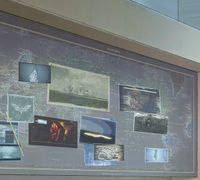 An image of Mothra taped to a map in Houston Brooks' office in the first issue of Skull Island: The Birth of Kong

A photograph of what appears to be a cave painting of Mothra was taped to a map in Houston Brooks' office in 2012.

This is a list of references for Mothra/Legendary. These citations are used to identify the reliable sources on which this article is based. These references appear inside articles in the form of superscript numbers, which look like this: [1]

↑ back to top ・ contents
Retrieved from "http://wikizilla.org/w/index.php?title=Mothra/Legendary&oldid=104773"
Categories: