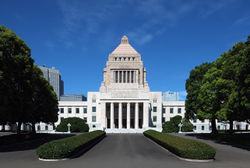 The National Diet Building (国会議事堂,   Kokkai-gijidō) is the center of the Japanese Government in Tokyo, and is where the country's parliament meets. Due to its importance in the country's affairs and landmark status, it appears in many different kaiju films.

After the residents of Odo Island and an expedition force led by Kyohei Yamane find Godzilla after he rises behind the island's hill, some of the residents and the expedition force return to Japan and tell the government what they had found from within the Diet Building. It is here where Yamane provides his theory as to how Godzilla came to exist. Later, during Godzilla's attack on Tokyo, he travels towards the Diet Building, and walks straight through the west wing, tearing large parts of the building down as he moves through it.

After Moguera's rampage was stopped, Japan's leaders met at the Diet Building to discuss the recent attacks. There, they concluded that the earthquake that destroyed a village near Mount Fuji was likely deliberate, and carried out by the same force that built Moguera. The JSDF immediately deployed to the Mt. Fuji area to investigate the force behind the attacks.

During the fateful Alliance missile strike which opened a nuclear war, the National Diet Building stood almost directly next to the nuclear explosion's hypocenter, and was destroyed near-instantly during the nuclear blast. Its remnants were then scorched by the fires which consumed the entire city. After the flames died down, and the lava ejected from the ground solidified, the wreckage of the Diet building stood among the blackened landscape.

King Kong stands atop the Diet Building in King Kong vs. Godzilla

After menacing Tokyo, King Kong arrives at the Diet Building and climbs it, somehow not breaking the building in the process. The JSDF roll in, and prepare to fire at the Giant Ape, but relent after it is discovered that Kong is holding Fumiko in his right hand. It is then that they decide to fire rockets containing Farolacton juice into the air while playing recordings of the Faro Island natives. King Kong falls asleep, freeing Fumiko and allowing the JSDF to take him to Godzilla via a series of balloons and a pair of Sikorsky H-19 Chickasaws.

Following the destruction caused by Godzilla and Rodan in the countryside of Japan, a emergency press meeting is held at the Diet Building, where the Cabinet begs the Shobijin to use Mothra to fight King Ghidorah, who is rampaging through Japan. At the same time, King Ghidorah begins destroying the city of Tokyo with his gravity beams, leaving Tokyo Tower and the rest of the city in ruins.

Mothra flies out of her cocoon on the Diet Building in Godzilla vs. Mothra

After arriving in Tokyo to rescue the Cosmos, Mothra was attacked by the JSDF, who bombarded her with artillery. After seeing that the Cosmos were safe, Mothra crawled to the Diet Building and began to create her cocoon. Hours later, the military and large crowds of onlookers had gathered around the building, and the Cosmos were allowed to go free. The Cosmos then sang to Mothra's cocoon, and Mothra emerged in her adult form. She then flew to Yokohama to battle Battra.

Godzilla approaches the original Diet Building in 1954 in Godzilla vs. Megaguirus

After Godzilla attacked and destroyed Tokyo in 1954, the Japanese capital was moved to Osaka, and a new National Diet Building was constructed there.

During their climactic battle in Tokyo, Godzilla and Kiryu smashed through the Diet Building, destroying it.

After Godzilla fired his atomic breath and obliterated three districts of Tokyo at once, the Diet Building could be seen on fire amid the devastation.

The Diet Building appears during the game's final boss battle against Bagan, with the building being destroyed when Bagan's cocoon explodes and reveals his monster form.

The Diet Building appears as a destructible building in Godzilla: Kaiju Collection.

The Diet Building appears as a destructible building in some stages of Bandai Namco's Godzilla.

↑ back to top ・ contents
Retrieved from "http://wikizilla.org/w/index.php?title=National_Diet_Building&oldid=157005"
Categories: