Difference between revisions of "Pairans"

The Pairans (パイラ星人,   Paira Seijin, lit. Paira Star People) are a benevolent race of starfish-like aliens who first appear in the 1956 Daiei film, Warning from Space.

The Pairans are a race of creatures which resemble starfish. They have one massive eye in the centre of their bodies. When in their true forms, the Pairans are shown to be very large, with a height of at least 4 metres.

A group of Pairans notice a rogue planet threatening to collide with Earth, and travel to Earth to warn the humans of their impending tragedy. They send one of their kind to Earth, but not before giving her a human disguise through mutation. From this point onwards, the aliens endeavoured to warn the humans of their impending fate, all while struggling to keep the truth about them hidden from the humans, out of a fear of being confronted if they were revealed to be from outer space. 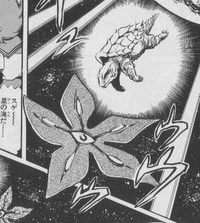 In this 1995 manga featuring several Kaiju based on unmade Daiei monsters, the Pairans make their sole appearance outside of their debut film. A giant Pairan arrives and escorts Gamera through space.

44 months ago
Score 1
I clicked on this page to check if there were any missing images that needed uploaded. Instead I was greeted with an image of people in star suits with an eye resembling the Eye of Providence. Now I desperately need to see this film, if only to see what these weird Star Men are like.
Permalink
↑ back to top ・ contents
Retrieved from "http://wikizilla.org/w/index.php?title=Pairans&oldid=127292"
Categories: