The strange, dead monster kaiju profile is the 45th episode of Wikizilla's Kaiju Profiles video series. It was uploaded on April 1, 2019. 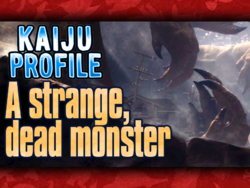 Hey kaiju fans, Titano here, and today we're taking you back to 2013... when you clicked on what you thought was another fan trailer for Legendary Pictures' "Godzilla" and gradually realized you were watching the real deal.

This “mood piece,” intended to be shown only to Warner Bros. executives and fans at San Diego Comic-Con, has Godzilla standing triumphant over a ruined city and what the book "Godzilla: The Art of Destruction" described as "a strange, dead monster." This is the closest thing it has to an an official name, although fans often refer to it as Vishnu—the four-armed Hindu god referenced in J. Robert Oppenheimer's quotation as the camera pans over the corpse. "Vishnu takes on his multi-armed form…"

As with many Hollywood blockbusters, a ton of screenwriters worked on "Godzilla." Legendary hired the first, David Callaham, in 2010. In his story, Godzilla faced an ancient enemy in the modern age—but not a MUTO. Josh Nizzi designed Rokmutul in the spring of 2011, with Frank Hong contributing a battle between Godzilla and the six-legged beast at Alcatraz. By the time British VFX company MPC began work on the "Godzilla" mood piece in 2012, Max Borenstein was writing the draft that would introduce the MUTOs. He clarified in an interview with Toho Kingdom that the strange, dead monster was simply a placeholder to show Godzilla would fight another monster.

The MPC mood piece surprised the Hall H crowd at San Diego Comic Con in 2012, who gave director Gareth Edwards a thunderous reception. Though cunning attendees snapped a few photos and a modified version was screened again the following year, the rest of us wouldn't get to see it until October 4, 2013, when io9 discovered it on YouTube in 720p quality. The user who uploaded it had no avatar, no other videos, and identified themselves as Akira Watanabe, the late Toho art director who helped design Godzilla in 1954. Warner Bros. soon took down the video, but duplicate uploads ensured that it spread through the fandom like atomic breath through Tokyo. Ironically, some of the footage was enhanced for the first official "Godzilla" trailer to make up for the lack of completed VFX shots. There has yet to be a Blu-ray or DVD release of the film with the mood piece as a bonus feature, leaving Watanabe's bootleg as the best record of the strange, dead monster's existence.

The marketing campaign for the 2014 film held back on images of the MUTOs for quite some time, leaving room for a few false rumors that the strange, dead monster would appear in the movie after all. This set of images was purportedly for a Bandai America toy line, with the spindly MUTO based on descriptions of the footage shown at Comic-Con in 2013. Someone also dreamed up the name "Talaghan" for the strange, dead monster, which means “fallen” in Korean.

That's as far as we can stretch this video about one of the most obscure monsters in Godzilla history, but we’ll have more coverage of the 2014 film on the way soon. Bye-bye!