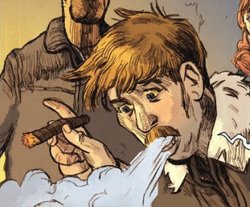 The Black Wall Vine is a traditional hallucinogen and entheogen smoked by the Tagatu people in their worship of Kong, featured in the 2017 King Kong comic, Kong: Gods of Skull Island.

The Black Wall Vine grows on the wall which surrounds the Tagatu village on Skull Island, and is smoked by Bar-Atu and his followers as they tell stories of their god, Kong.

The Black Wall Vine was smoked religiously by Bar-Atu's followers, and was an integral part of Kong worship. They would gather at the foot of the wall and smoke as Bar-Atu spoke of Kong's various adventures. When the dying missionary James Copland arrived on Skull Island in 1912, he quickly became hooked on the Wall Vine, and experienced visions alongside the rest of the Kong worshipers. However, the Wall Vine visions, his impending death, and alcohol abuse lead to Copland's rapid mental deterioration and forced him and his party to be banished from the village. Despite the hallucinogenic warping of Kong's tales, some of them appeared to be based in fact, on account of many of the aspects of the stories being observable in the jungle.

↑ back to top ・ contents
Retrieved from "http://wikizilla.org/w/index.php?title=Black_Wall_Vine&oldid=168670"
Categories: