From Wikizilla, the kaiju encyclopedia
(Redirected from Godzilla: Tokyo S.O.S)
Jump to navigationJump to search

Godzilla: Tokyo S.O.S. (ゴジラ×モスラ×メカゴジラ 東京SOS,   Gojira Mosura Mekagojira Tokyo Esu Ō Esu, lit. Godzilla × Mothra × Mechagodzilla: Tokyo SOS) is a 2003 tokusatsu kaiju film produced by Toho, and the twenty-seventh installment in the Godzilla series, as well as the fifth in the Millennium series. The film was released to Japanese theaters on December 13, 2003.[1]

A direct sequel to Godzilla Against Mechagodzilla, Tokyo S.O.S. is the only entry in the Millennium series to be a sequel to the prior film. One year after Kiryu's battle against Godzilla, Mothra appears to request the first Godzilla's bones be returned to the ocean, as their use in Kiryu violates the natural order. The government is hesitant to scrap the project lest Godzilla return, which comes to pass as the King of the Monsters makes landfall in Tokyo once more. Mothra arrives to intercept him, and the government is left with no choice but to launch Kiryu into the battle as well.

In 2004, one year after the epic battle between Godzilla and Kiryu, Mothra's Shobijin appear to Shinichi Chujo, a scientist who helped to rescue them from Clark Nelson back in 1961. They inform him that it was wrong for the Japanese government to create a weapon using the first Godzilla's remains, and that they must be returned to the ocean or else Mothra will be forced to declare war against humanity. They assure Chujo that if the first Godzilla's remains are returned to the ocean, then Mothra will defend Japan from the current Godzilla in place of Kiryu. The Shobijin then depart with Mothra. Meanwhile, repairs on Kiryu are nearing completion, and the mech will soon be ready to face Godzilla once again should the monster return. The original members of the Kiryu squad are being sent to the United States for further training, and a ceremony for them is being held by the AMF. During the ceremony, Yoshito Chujo, Shinichi Chujo's nephew, notices Kiryu's former pilot Akane Yashiro walk out of the room and into Kiryu's hangar. Yoshito follows Akane and starts a conversation with her. Akane remarks that she feels sorry for Kiryu, as she senses that it does not want to fight Godzilla. Akane tells Yoshito to take good care of Kiryu, then leaves.

Sometime later, the carcass of a gigantic sea turtle washes ashore in Japan. The creature is identified as a Megalo matamata, or "Kamoebas," a giant species of sea turtle discovered on Sergio Island in 1970, and the first specimen spotted since the 1980's. The creature has large claw marks in its neck, leading the AMF to conclude it was killed by Godzilla. As the AMF rushes to complete Kiryu in preparation for Godzilla's arrival, Chujo meets with the Prime Minister, Hayato Igarashi, telling him to scrap the Kiryu project as per the Shobijin's warning. Igarashi acknowledges Chujo's concerns, but states that too much has been invested into the Kiryu project to allow it to be scrapped now. He swears that as soon as Kiryu successfully kills Godzilla, he will have the project ended, but until then Kiryu is Japan's only defense against Godzilla.

Godzilla soon surfaces in Tokyo Bay, easily making his way through the JSDF's defenses and approaching the hangar containing Kiryu. As Tokyo is evacuated and Kiryu is prepared for launch, Chujo's grandson Shun creates a giant version of Mothra's symbol using desks from a school, inspired by Chujo and his friends painting the symbol on an airport runway back in 1961 to attract Mothra. Sure enough, Mothra arrives in Tokyo and attacks Godzilla. Mothra is able to hold her own against the behemoth for a time, but Godzilla eventually overpowers her. Left with no choice, Igarashi orders Kiryu to be launched into battle against Godzilla. Godzilla and Kiryu do battle once again, only for Godzilla to knock the mech out of commission with his atomic breath. On Himago Island, two twin Mothra larvae hatch from an egg and swim to Tokyo to aid their mother against Godzilla. When Godzilla spots the larvae, he fires his atomic breath at them, only for their mother to fly in front of the blast and sacrifice her life to save them. Heartbroken, the larvae battle Godzilla while Yoshito enters the damaged Kiryu and attempts to repair him manually. Yoshito gets Kiryu back up and running, but finds himself trapped inside of the mech. Rather than compromise the mission, Yoshito lies and says he is safe and allows Kiryu to re-enter the fray. Kiryu engages Godzilla again near the National Diet Building, and manages to pierce the chest wound Godzilla sustained a year before with his drill hand. Kiryu rotates the drill and severely wounds Godzilla, then fires his hyper Maser beams into the open wound, causing Godzilla to roar out in agony. Mothra's larvae then cover Godzilla in silken webbing, leaving him immobile on the ground. The AMF orders Kiryu to finish Godzilla once and for all, but the first Godzilla's spirit is reawakened again and takes control. Rather than kill another member of his kind, Kiryu chooses to carry the beaten Godzilla out to sea and sink with him into the Japan Trench. As Kiryu and Godzilla fly over the ocean, several AC-3 White Heron jets fly next to Kiryu to try and rescue Yoshito, whom the AMF has just learned is trapped inside. Kiryu opens a trap door on his body and allows Yoshito to escape and be rescued by one of the planes, displaying a message reading "Sayonara Yoshito" on a computer screen. Yoshito sadly replies "Sayonara Kiryu" and watches as Kiryu plunges into the ocean with Godzilla. Both monsters sink into the trench until all contact is lost. Igarashi declares this a "hollow victory," while the Shobijin are content that the spirit of the original Godzilla can once again rest in peace as they return to Infant Island with the larvae.

In an AMF laboratory, several cryogenic tanks are holding the DNA of various other kaiju including the 1954 Godzilla and a 1987 Kamoebas. 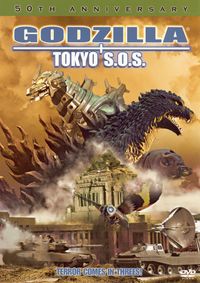 Godzilla: Tokyo S.O.S. was released to DVD in the United States in 2004 by TriStar Pictures, as part of TriStar's line of releases commemorating Godzilla's 50th anniversary. TriStar included Toho's uncut international version of the film, along with both Omni Productions' English dub and the original Japanese audio track. TriStar's subtitles for the Japanese audio were simply derived from Omni Productions' dub, in which Kiryu is referred to as "Mecha G." This was reportedly done out of fear that calling the film's Mechagodzilla "Kiryu" would confuse viewers who had not seen the previous film, Godzilla Against Mechagodzilla, and calling him "Mechagodzilla" would not match the characters' onscreen lip movements. Tokyo S.O.S. was the last new Godzilla film to be distributed by TriStar. Following TriStar's DVD re-release of Godzilla vs. Mechagodzilla II in 2005, TriStar's parent company, Sony Pictures Entertainment, solely handled all subsequent home video releases of Godzilla films.

Godzilla: Tokyo S.O.S. is generally well-liked by Godzilla fans for its monster action and sometimes respected for being the sole direct sequel of the entirety of the Millennium series.

This is a list of references for Godzilla: Tokyo S.O.S.. These citations are used to identify the reliable sources on which this article is based. These references appear inside articles in the form of superscript numbers, which look like this: [1]

Showing 15 comments. When commenting, please remain respectful of other users, stay on topic, and avoid role-playing and excessive punctuation. Comments which violate these guidelines may be removed by administrators.

10 days ago
Score 0
Alternate Ending: While Kiryu was flying godzilla to sea, King Kong then jumps into the air and smacks kiryu with a tree making kiryu let go of godzilla and explode into the ocean.King Kong then brings back godzilla to tokyo where they are found by the 2 Mothra Larvae. Kong then frees godzilla from the slik , then once he got out he looked at the 3 kaiju and roared at them then returned to the sea follwed by kong and the larvae. Then all 4 turned around and all of them let out a big roar. I think i explained too much.
Permalink
You are ignoring the author of this comment
Show comment | Manage ignore list

one month ago
Score 0
Only the names "1954 Godzilla" and "1987 Kamoebas" are visible, but there are other canisters for Gaira, Ganimes, Sanda, Varan, Futami, Tezuka and Ebirah off screen.
Permalink
You are ignoring the author of this comment
Show comment | Manage ignore list

4 months ago
Score 0
This one used to be one of my favorites but after my last rewatch I was honestly disappointed. The designs and soundtrack are awesome (fav Mothra design is the one in this movie) but the fight choreography kills it for me, it's kinda lame tbh.
Permalink
You are ignoring the author of this comment
Show comment | Manage ignore list

one month ago
Score 0
When did I ever say that? I just said this film wasn't as good as I remember. I never said Against Mechagodzilla was better.
Permalink
You are ignoring the author of this comment
Show comment | Manage ignore list

7 months ago
Score 0
do you have ideas for Futami and Tezuka's designs. does futami look like a giant t-rex with long arms with a brachiosaurus neck and head. does tezuka look like spacegodzilla but not.
Permalink
You are ignoring the author of this comment
Show comment | Manage ignore list

Finally got my hands on a copy of this movie. Not bad. The human action, while possessing a few interesting points (such as the protagonist being a mechanic and the guy from Mothra making a comeback), was a little dull. The monster fights were good, and the soundtrack was great. Unpopular opinion, but this movie has my favorite Mothra leitmotif of them all.

38 months ago
Score 0
While it is not one of my favorite Godzilla movies, mostly cause i can't stand Mothra larva, i will give Tokyo S.O.S. this. It easily has one of the best soundtracks in any Godzilla movie!
Permalink
You are ignoring the author of this comment
Show comment | Manage ignore list

I tend to favor this film over its predecessor.

Expanding on the plot of the last movie, it ups the ante by throwing Mothra and her larvae into the mix, bringing some additional monster star power. I really love the adult Mothra's design: It has the more accurate insect look of her GMK design, but with the aged, shaggy fur of her older incarnations.

The action is some of the best in the Millennium series, with lots of little nods to older Toho films like "Mothra" and "Mothra vs Godzilla". I especially love the scene where Mothra sacrifices herself to shield her offspring; it's probably one of the most powerful moments in a Godzilla movie there is.

49 months ago
Score 0
This movie was better then the previous one in my opinion.
Permalink
↑ back to top ・ contents
Retrieved from "https://wikizilla.org/w/index.php?title=Godzilla:_Tokyo_S.O.S.&oldid=177257"
Categories: