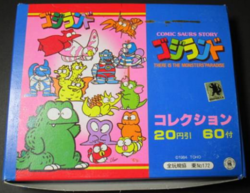 Godzilland (ゴジランド,   Gojirando) is a series of merchandise geared towards young children released beginning in 1984.

Godzilland consisted of stickers, buttons, coloring books, storybooks, puzzles, short comic strips, trading cards and other items featuring drawings of Godzilla and several kaiju from the Showa series drawn in a chibi style living and playing together. The activities the kaiju are shown doing range from playing sports, to shopping for groceries, trying on clothes, dancing, and frequently eating rice cakes. Some of the merchandise depicts the kaiju in various colors, Godzilla himself is seen in green, yellow and even pink, and at times shows multiple of the same kaiju at once. Interestingly, Hedorah is depicted as female and is one of Godzilla's friends rather than among his enemies, which in the line include Mechagodzilla, Gigan and King Ghidorah. Mothra's larvae are also shown to be brother and sister, as one larva is generally shown to be red and wear a hat, while the other is usually pink and has pronounced eyelashes and a bow on her head. Many pieces of merchandise in this line included a logo which read "COMIC SAURS STORY GODZILLAND THERE IS THE MONSTERS PARADISE."

Bootlegged Godzilland merchandise is known to exist. It is distinguishable from legitimate Godzilland merchandise due to inconsistencies in the illustrations of the kaiju. For example, Godzilla has a horn on his head, Mothra larva has antennae and more pronounced legs and feet, and Hedorah has claws. One bootleg illustration of Godzilla possesses a frill around his head, making him look suspiciously like Jirass.

To link to a regular website you use single square brackets.

For linking to other wikis you use [[wikia:w:c:<wikiname>:<pagename>]]

35 months ago
Score 0
Only some of this stuff is based on the OVAs. The original Godzilland merchandise line began in 1984, while the OVAs didn't start until 10 years later.
Permalink
↑ back to top ・ contents
Retrieved from "http://wikizilla.org/w/index.php?title=Godzilland_(Merchandise_Line)&oldid=155108"
Categories: