The giant snakes are a variety of abnormally large serpents. They tend to appear in King Kong media, almost always fighting against him. 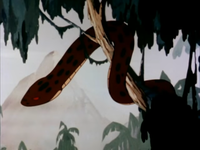 The giant snake in "The Greeneyed Monster"

A giant snake appears in the episode "The Hunter" where it is part of the background and does nothing, and as such, is quite highly detailed. A much less detailed version appears in "The Greeneyed Monster" where it doesn't do anything aside from considering its new meal.

In addition to the aforementioned Elasmosaurus, a giant snake also appears in the 1968 comic adaptation of King Kong. In this comic, it coils around King Kong, attempting to crush him, before being thrown away by the ape.

A few giant snakes can be found in the waters of the second world of King Kong 2: Furious Megaton Punch. They swim back and forth in the water, shooting energy spheres at King Kong, who can take care of them in a single punch.

The giant snake that appears in the 1991 comic adaptation of King Kong attempts to constrict King Kong, who easily unrestrain himself before killing the snake by pummeling its head against the ground.

While King Kong is defending himself against pteranodons in The Mighty Kong, a giant snake drops down on him, binding him. After a struggle, King Kong frees himself and throws the giant snake away, presumably for it to meet its end in lava.

↑ back to top ・ contents
Retrieved from "http://wikizilla.org/w/index.php?title=User:Key_Mace/Sandbox/Snake&oldid=148945"
Categories: