I was born in Raleigh, North Carolina on April 13, 2007. I spent the first 5 years of my life there. Then my dad got a new job so we moved to Ephrata, Pennsylvania. Now I am in 7th grade. I have been on the site for a little more than a year now and I have about a 2000 edits.

Other Games that I have 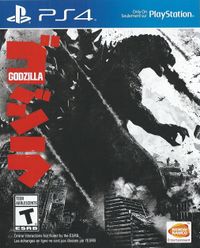 Other Movies and TV shows that I have

The second toy I saw in the store

The first toy I saw in the store

I am trying to get more Godzilla movies until I watch all of them. There is a mall near me with a store called FYE that is celebrating Godzilla's anniversary with movies and toys from Godzilla including a big Final Wars Godzilla toy and Kiryu (and I mean big). In total the things I would buy from that store would cost $250-$280 (US dollars). I'm also planning on getting the Attack on Titan movies.

I have built a LEGO build that when combined with its counterpart I call the Super Penguin Bot 3000 (parody of Super Mechagodzilla and Garuda). It’s called “Penguin” Bot 3000 because my friend who moved away loved penguins. Photos are in the gallery below. I will update them as the mech changes.

Gallery of the Penguin Bot 3000 and Super S

Godzilla 1954 is an absolute masterpiece. It has surprisingly good looking effects for it's time (thanks to Tsuburaya) and a perfect soundtrack (thanks to Ifukube). I like how they employed Godzilla rarely but when they did he was good. It didn't mess up the movie because the human action was still good. I give it a full 5 stars.

Godzilla vs. King Ghidorah is a movie that a lot of fans like. However, I don't really like M11 when he's running after the car (a little bit too cheesy and Terminator-esc) or King Ghidorah's origin too much. The last quarter of the movie I like however. 4 out of 5 stars.

Godzilla vs. Mechagodzilla II has a perfect start to it building up Rodan and then revealing him with a fight against Godzilla. Mechagodzilla has an awesome looking design (in his Super Mechagodzilla form) and the fights are good, especially the first one. Five out of 5 stars.

Godzilla vs. Destoroyah is an almost perfect movie. It begins with one of the best pieces of Godzilla music which makes Godzilla's theme more menacing due to his transformation. This movie has good music, fights, and a really good villain kaiju in the form of Destoroyah. It has great human characters and the dub isn't complete crap like some movies. 5 out of 5 stars.

In this film, one of the most bad@$$ versions of Mechagodzilla appeared. It was a decent movie but the main two characters are really relatable. The fight scenes are really good though. You really see the energy of Kiryu when he fights physically.

This movie is just a big fun mess. The Xilien Commander in particular is hilarious. The only problem I see is that the many fights are very short other than two of them.

This movie had terrible characters (except Serizawa) that were boring and very stereotypical with Ford Brody being the soldier coming home, Elle Brody being the girl being in peril, and Joseph Brody being the crazy conspiracy theorist. The MUTOs are a good kaiju in terms of interest and mystery. Godzilla is pretty elusive and realistic. The only problem I have with Godzilla is that he's in about 10 minutes of this 2-hour long movie.

Godzilla: King of the Monsters Poster

This movie was absolutely amazing. The Toho monsters were done well and they know how to treat them. The humans are okay but the monsters make up for it. The music is really good. 5 out of 5 stars.

This movie is more grounded in reality than almost any other Godzilla movie (apart from Godzilla 2014). I like how it plays out as a more of a realism movie rather than another "monster brawl" as D-Man 1954 put it. They have to figure out Godzilla's origins, strengths, weaknesses, and why he evolves and mutates so fast. In the end, they do and they freeze him with a blood coagulant. But the tail shot is what gives me the chills. My favorite scenes are probably the atomic breath reveal scene and when the military takes Godzilla on the first time in the Tama River.

Godzilla: Planet of the Monsters Poster

This movie was decent. I don't really know what to say. It had incredible ideas that just failed in execution big time. Godzilla in this movie is done right as a menacing, all-powerful god. In the middle of the movie there is some boredom felt but that can be excused as this is the first in atrilogy so it needs to set itself in the ground. Haruo feels just a bit too edgy at times as well. 4 out of 5 stars.

Godzilla City on the Edge of Battle Poster

This movie was a disappointment. As you can see by the poster Mechagodzilla is in it. I didn't like the design of Mechagodzilla but you can't lie that another MGvG fight would be good. Instead what we got is a love triangle (a weird on at that) in a city with guns and two harpoons that didn't do crap. 2 out of 5 stars.