Kong's mother is a character first introduced in the 2005 novel Kong: King of Skull Island, and subsequently adapted into other stories featuring the character of King Kong. She and her mate are typically killed in Kong's backstory at the hands of a vicious predator, with Kong maturing and one day avenging his parents. In addition to her multiple appearances in stories based on Joe DeVito's Kong of Skull Island, the character of Kong's mother most recently appeared as a skeleton in the 2017 film Kong: Skull Island, and alive in flashback scenes in the film's official tie-in comic Skull Island: The Birth of Kong.

Like the rest of her species, Kong's mother tends to resemble a gigantic gorilla, one way or another, with no particularly female characteristics in her appearance. However, in the MonsterVerse continuity, in which Kong's species share more traits in common with humans, she is more rotund than the males with more pronounced breasts and longer hair on her head.

The mother of the giant ape who would later become known as King Kong, she and her mate were believed to be the last living members of their species prior to the birth of their son.

Kong's parents were quite elderly when they were slaughtered by Gaw: a gigantic Deathrunner. This set their son on the path to defeating Gaw and avenging his parents, and becoming the god to the Tagatu people of Skull Island.

K'iin's biological mother was a feral Kong known as the Ghost, who lived with her son in the wilds of Skull Island before he was taken away and essentially adopted by Valla, another female Kong. Ghost then assumed the title of Gaw before being killed by her son.

While worshiping Kong under the influence of the Black Wall Vine, Bar-Atu told his followers stories about their god Kong, one of which involved Kong's mother. Allegedly at one point, a gigantic worm stole Kong and took him to the center of the Earth. Kong's mother followed the worm, and together they defeated it before returning to the surface. Sometime later, a wizard reanimated the remains of Kong's deceased ancestors, but Kong defeated them and returned them to their rest. 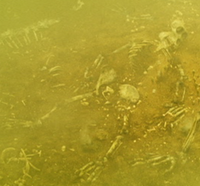 The skeletal remains of Kong's mother in Kong: Skull Island

The skeletal remains of Kong's parents were present laying side-by-side in the giant graveyard that served as the lair of the Skullcrawlers, referred to by the Iwi as the "Valley of the Fallen Gods."

After millions of years of struggle against the Skullcrawlers, Kong's parents were the only two members of the species left in existence, and were present when the Iwi people first arrived on Skull Island. At some point, Kong's mother became pregnant, but the Skullcrawler threat persisted, and she went in to labor while on the battlefield. She and her mate did their best to fend the devils off, and their son was delivered safely. Kong's mother then sealed the infant in a cave before she and his father succumbed to the Skullcrawlers, and Kong watched as they were slaughtered. After the battle, the young Kong emerges from the cave and knelt over the corpses of the parents he never knew, weeping. From that day onward, Kong fought to defend the other creatures inhabiting the island from the monsters that had slaughtered his parents, keeping the Skullcrawler population and growth in check and driving them deep underground.

11 months ago
Score 0
You got to feel bad for Kong, In every continuity, his parents are slaughtered. Couldn't it hurt to have them alive with him as an adult?
Permalink
↑ back to top ・ contents
Retrieved from "http://wikizilla.org/w/index.php?title=Kong%27s_mother&oldid=151314"
Categories: