Kero Cat (ケロキャット,   Kerokyatto) is a feline kaiju created by Toho that first appeared in the first episode of the 1973 tokusatsu television program, Warrior of Light Diamond Eye, episode being titled My Name is Diamond Eye

Kero Cat has a face that largely resembles that of a domesticated cat. Her skin is mostly green, with a yellow underbelly. She has various similarities to Gerarachin, in her color scheme, and eyes.

Kero Cat acts as a #3 in command for the Zensei Majin gang, being very loyal to her masters and giving out plans and advice for destroying Diamond Eye and Kotaro Rai.

My Name is Diamond Eye

Kero Cat first appeared as a woman named Shu Dama (朱玉,   Shu dama). She was involved in a jewel heist, along with King Cobra who was in his human disguise: Gen Kai Ryu, Mojingah who was also disguised, and a large group of Cow and Horse People all in human forms. They stole very many valuable jewels and gems including, unbeknownst to them, a diamond ring which contained the spirit known as Diamond Eye. The hero was released from the ring just in time to kill Mojingah and his Cow/Horse-themed henchmen, and protect Kotaro Rai. In the madness, Kero Cat and King Cobra were able to escape unharmed.

Smash the Wall of Death!! 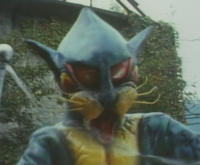 Kero Cat in Smash the Wall of Death!!

Kero Cat appeared as a woman named Cat Mask (猫マスク,   Neko masuku), who was furious with Gerarachin's death in the previous episode, as they had a large bond with each other. And so she sent out to kidnap Kotaro Rai. She shape-shifted into Kabo-Ko and faked a kidnapping to lure Rai into a dark basement, where she tied up and repeatedly whipped Rai. Fortunately, Rai was saved by the real Kabo-Ko, but not for long, as they were both kidnapped later.

Rai was able to escaped from the dark basement with Kabo-Ko, but was soon caught again by Cat Mask. Rai summoned Diamond Eye who had a short fight with Cat Mask before firing his Inner-Soul Illumination Beam to reveal the true form of Kero Cat. Rai ran with Kabo-Ko only to discover a bunch of bandits and strangely, Kero Cat's disguise Shu Dama attacking someone down a mountain. This was strange because Kero Cat was fighting Diamond Eye in the meantime. Rai was unable to get down the mountain to save the man being attacked.

After a long and tough fight, Diamond Eye destroyed Kero Cat with the Royal Punch, and then he made a bridge for Rai to go down the mountain and save the man. Diamond Eye watched as Rai killed most of the bandits. Shu Dama then shot the man and escaped unscathed. 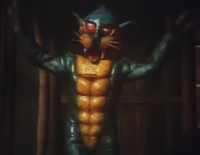 Kero Cat was reincarnated and appeared yet again as Shu Dama. After Gerarachin's death in the previous episode, when he attempted to retrieve a stolen gem that can be used to create a laser rifle from a child, but ultimately failed and was destroyed by Diamond Eye, Shu Dama sent out to retrieve the said gem so she could create the laser rifle. Shu Dama successfully retrieved the gem and kidnapped the child who originally stole the gem. After the child was brutally beaten, Rai found himself in Kero Cat's lair, and he and the child were locked in a small cell.

Shu Dama tried to execute Rai and the child with the new laser rifle, but missed and Rai was able to summon Diamond Eye, who fired his Inner-Soul Illumination Beam at Kero Cat, revealing her true form. After a long fight, Diamond Eye was able take Kero Cat's weapon and stab her with it, and then finish her off with the Royal Punch.

Afterwards, Diamond Eye fought against King Cobra and severely wounded him, leading up to Princess Cobra's arrival in the next episode.

Kero Cat was reincarnated with her new disguise Ma Rin (魔倫,   Ma rin) who summoned Mojingah, who was disguised as Maddo to infect a large group of people with Human Condition, so they can become Horse and Cow People and Mojingah could lead an army. This plan was successful, but Rai caught on and after being brutally beaten and almost killed by Maddo, he summoned Diamond Eye who temporarily defeated Mojingah.

Rai retreated the area only to find Ma Rin, Princess Cobra and Onikabuton waiting for him. A disguised Princess Cobra attacks Rai before giving up and Ma Rin took over, and after being brutally beaten, Rai summoned Diamond Eye. Before Diamond Eye could fight the three, they retreat and an injured Mojingah teleports in. After a short and easy fight, Mojingah is defeated with the Royal Punch. 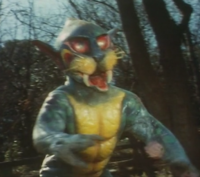 Kero Cat as Ma Rin disguised as a nurse after Kotaro Rai was injured during combat with a large group of Cow and Horse People and went to the hospital. Ma Rin used a magic spell to make Rai have eternal nightmares as she stole his ring. Nonetheless, Diamond Eye still showed up and appeared on the roof where he was chained in between barrels of nitro glycerin and a timed bomb was set next to the barrels. Diamond Eye telepathically called Rai to his location, but Rai was unable to help him. Princess Cobra, who was disguised as Rankha appeared and shut off the bomb. Because of her injuries from the previous episode, she was unable to defeat Diamond Eye and retreated.

Diamond Eye then found Ma Rin in the middle of a small forest and he fired his Inner-Soul Illumination Beam, revealing Kero Cat's true form. Kero Cat tried using multiple weapons against Diamond Eye, but she was effortlessly destroyed with the Royal Punch.

Kero Cat's main disguise is a woman named Shu Dama, and she acted as an executive to the Zensei Majin gang.

Kero Cat's first other disguise is a woman named Cat Mask who often wields a whip and a knife. She also has the ability to shape-shift.

The first Kero Cat wielded a whip on a metal stick.

The second Kero Cat used a rotating saw attached to a chain as her weapon.

The second Kero Cat could create multiple metal shields in the shape of locker doors that could deflect any projectile, including Diamond Eye's Royal Punch.

Kero Cat's main disguise Shu Dama was replaced with a woman named Ma Rin, who was armed with a large pistol and deadly claws. She could also cast magic spells.


↑ back to top ・ contents
Retrieved from "http://wikizilla.org/w/index.php?title=Kero_Cat&oldid=148946"
Categories: