Gerarachin largely resembles that of a beetle, it has a very insect-like head, as well as notable mandibles. His skin is mostly blue, with some yellow on his underbelly and his back is covered by a protective shell that has designs which make it look like that of an eyeball of sorts. He also has clawed fingers and a tail that is in the shape of an octopus tentacle. 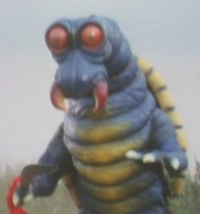 Gerarachin appeared as a man named Doiru (ドリル,   Doiru) who was specifically assigned by King Cobra to assassinate Kotaro Rai and steal his diamond ring. Rai is attacked by the disguised monster and his minions, and summons Diamond Eye who uses his Inner-Soul Illumination Beam to reveal the true forms of Gerarachin, and his fellow Horse and Cow People. Gerarachin proves to be a difficult fight, but is no match for Diamond Eye. Gerarachin is destroyed by Diamond Eye's Royal Punch.

Unbeknownst to Rai, or anyone else, Gerarachin and Kero Cat actually had a strong bond with each other, and Kero Cat was furious after seeing Gerarachin's death. So she disguised as Cat Mask and attempted to assassinate Rai, leading up to episode 7. 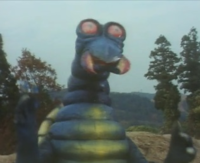 Gerarachin was reincarnated and disguised as a man named Wolf (ウルフ,   Urufu). He was sent out to retrieve a special gem that was created by a scientist. This gem could be used to create an extraordinarily powerful laser rifle that could disintegrate its targets immediately upon contact with its laser. Once Wolf reached the laboratory, they realized that the gem was stolen. Wolf furiously kidnapped the scientist, thinking that he purposefully hid the gem.

As brutally beaten the scientist was, he continued to claim to not have the gem. And so Wolf and some bandits are sent out to find it elsewhere. During the search, they find Kotaro Rai and Rai is attacked and shot, being severely wounded. Afterwards, they discover a child with the gem in his hand, and so Wolf and his men (Horse People and Cow People, disguised as bandits) chase the child and eventually capture him.

Kotaro Rai tries to use all of what little strength he has left to pull himself out the mountain where the thugs and the child are, but he keeps slipping. So he summons Diamond Eye who flies Rai up to the top and fights the gangsters. After the bandits are killed, Diamond Eye fires his Inner-Soul Illumination Beam at Gerarachin, revealing his true form. 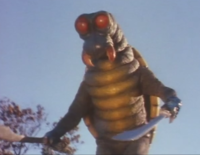 Gerarachin was reincarnated as an unnamed criminal, who was sent with Wareatama to simply kill Kotaro Rai alongside multiple Horse and Cow People who were disguised as bandits. This ambush failed and Rai was able to take out the bandits, and summoned Diamond Eye to take care of Gerarachin and Wareatama, who were outmatched when Diamond Eye used his Wind of Justice attack and they both retreated, never to be seen in the episode again. 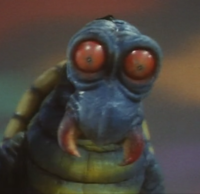 After King Cobra recovered from his injuries, he sent out his daughter to find and kill Rai. Teaming up with her father, she was able to lure Rai into a wax museum and lure him into a room full of hands coming through the walls, trying to strangle Rai. Rai was eventually able to summon Diamond Eye who fought Princess Cobra and Gerarachin, who was also present in a different room. Gerarachin was destroyed by the Royal Punch and Princess Cobra retreated. Diamond Eye then freed Rai from the hand room. 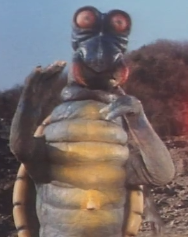 Gerarachin was reincarnated as a man named Gamuro (ガムロ,   Gamuro) and was sent to assassinate Kotaro Rai in a junkyard. The attempt was unsuccessful, and Gamuro ended up retreating, only for Rai to stumble upon a disguised Princess Cobra, who showed kindness towards him, but later tried to poison him as she retreated. Rai quickly recovered, and he chased after her, only to stumble upon Gamuro and a large group of bandits present. After being bound and gagged, Rai's ring was stolen by Princess Cobra and then thrown into fire. Despite of this, Diamond Eye still appeared and fired his Inner-Soul Illumination Beam, revealing the true forms of Princess Cobra and Gerarachin and fought them. Diamond Eye tried to finish Princess Cobra with the Royal Punch, but Gerarachin stood in the way and was obliterated. Diamond Eye tried to finish her off again, but a Cow Person stood in the way as well and Princess Cobra retreated. 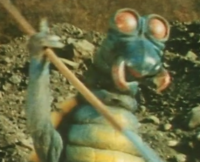 Gerarachin in The Great Dynamite Strategy

Gerarachin appeared as an unnamed criminal, who was alongside a disguised Onikabuton. After Onikabuton killed a childhood friend of Kabo-Ko's, she sent out to find and bring him to justice. She followed Onikabuton and Gerarachin into a carnival, but she was caught and held at gunpoint. Rai caught up and summoned Diamond Eye who challenged Gerarachin into battle. Gerarachin was quickly destroyed with the Royal Punch.

Gerarachin's first disguise was a man named Doiru, who has a suitcase with a hidden barrel that can fire bullets and even explosives.

Gerarachin's second disguise was a man named Wolf, who armed with a silenced pistol.

The second Gerarachin could pull out yellow bombs from his eyes. He did however have a very limited supply of these bombs, as he quickly ran out of these bombs.

The second Gerarachin could make himself run at very high speeds whenever he wanted. He used this to try and retreat from Diamond Eye, but he ultimately failed and was temporarily stunned so the hero could catch up.

The second Gerarachin could jump up to extreme heights.

Gerarachin's third disguise was a human named Gamuro, who was armed with a machine gun.

The fifth Gerarachin wielded a spear.

The fifth Gerarachin was capable of curling himself into a ball while engulfing himself in flames, making him a deadly, rolling fire-ball.

Gerarachin has two razor-sharp mandibles that can deal immense damage to whatever foe happens to be bitten.

Gerarachin has a protective shell on his back which can deflect most attacks and projectiles, including Diamond Eye's Throwing Diamond. It can also be taken off and used as a shield.


↑ back to top ・ contents
Retrieved from "https://wikizilla.org/w/index.php?title=Gerarachin&oldid=171143"
Categories: