The last and most powerful of the Xiliens' legion of monsters, Monster X arrived on Earth concealed inside the Gorath asteroid, which was shot down by Godzilla over Tokyo. Monster X initiated combat with Godzilla, and proved to be a considerably more challenging opponent than the rest of the Xiliens' monsters. Monster X was briefly joined by Gigan, but Mothra soon arrived and sacrificed herself to destroy Gigan, leaving only Monster X and Godzilla. When the Xilien Mothership self-destructed, Monster X transformed into the immensely powerful Keizer Ghidorah, which nearly killed Godzilla before the Gotengo intervened and gave Godzilla a surge of energy that allowed him to triumph over his extraterrestrial foe. Monster X was Godzilla's final opponent in the Millennium series, as well as his last onscreen foe for a period of 10 years and the final new kaiju introduced in a Toho film until the Servum.

It is possible that Monster X's name is a reference to "Monster Zero," an alias for King Ghidorah. The "X" in his name could come from the Xiliens' Japanese name, the "X Aliens."

Godzilla: Rage Across Time #4 contains a copyright icon for Keizer Ghidorah, despite Godzilla being the only monster to appear in the comic. Peculiarly, the icon used there uniquely bears the name "KEIZER GHIDORAH" rather than "MONSTER X II." Rage Across Time #5—which does actually feature Keizer Ghidorah and Monster X—utilizes the normal "MONSTER X II" icon for the character, as do Godzilla: Ongoing #12 and #13.

Monster X and Keizer Ghidorah were designed by illustrator Katsuya Terada, who did character designs for many video games including the Legend of Zelda series. Monster X's design was meant to give the impression of Keizer Ghidorah's bones.[2][note 2] Monster X was portrayed by suit actor Motokuni Nakagawa, while Keizer Ghidorah's suit was operated by Nakagawa and Toshihiro Ogura, each of whom controlled one half of the suit.

Monster X is a bipedal creature with a white bone-like exoskeleton and black skin. Monster X has red eyes, a skeletal face, and long spikes on the top of his head. He possesses two small half-skulls on his shoulders and a long black forked tail.

Unlike most of the Xiliens' other mind-controlled monsters, Monster X displays true malice in his battle with Godzilla, fighting viciously and relentlessly. He seems to take pleasure in causing Godzilla pain, such as when he breaks Godzilla's wrists and suspends him into the air and when he holds Godzilla still for Gigan to slice him with his chainsaws. Monster X's maliciousness is further demonstrated when he continues the battle even after Gigan and the Xiliens are defeated and any mind-control the Xiliens had over him is severed. After transforming into Keizer Ghidorah, Monster X blasts and beats Godzilla mercilessly across Tokyo, throwing him around with his gravitational beams and kicking the weakened Godzilla in the head.

Monster X was summoned by the Xiliens from the Gorath asteroid, which has unknown origins. Keizer Ghidorah is a form of Monster X. It is unknown if the Xiliens themselves created Monster X or if he was simply discovered by them.

In the comic series Godzilla: Ongoing, Monster X's origins are equally cryptic. According to the Shobijin, Monster X is a creature who is "both of this world, and not of this world." Later comics establish that Monster X is likely of the same species as King Ghidorah, who is established to be a space-faring alien beast in Godzilla: Rulers of Earth.

Monster X was summoned by the Controller of Planet X through the Gorath asteroid. Godzilla destroyed Gorath with his atomic breath in the skies over Tokyo, devastating much of the surrounding area. Monster X then floated down behind Godzilla and attacked him. Monster X overpowered Godzilla in hand-to-hand combat until Godzilla retaliated, resulting in a stalemate between the two monsters. Eventually, the modified Gigan arrived to assist Monster X. Monster X held Godzilla still from behind while Gigan sliced his chest with his chainsaw hands. Mothra arrived and knocked Monster X and Gigan down, freeing Godzilla. Mothra and Gigan then fought and destroyed each other, leaving only Monster X and Godzilla. The monsters resumed their battle, with Godzilla gaining the upper hand and pinning Monster X to the ground, then proceeding to punch him repeatedly. Godzilla tried to blast Monster X in the face with his atomic breath, but Monster X pushed his head away, causing the beam to strike the Xilien Mothership instead. After the Mothership self-destructed and the Xiliens were destroyed, Monster X and Godzilla engaged in a beam-lock, causing both monsters to be blown back. After this, Monster X transformed into Keizer Ghidorah. 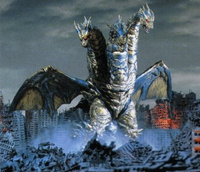 Monster X is a physical match for Godzilla with his rapid melee attacks and impressive agility. Monster X is also the only monster Godzilla fought in Godzilla: Final Wars that survived getting blasted by Godzilla's atomic breath at point-blank in the face, actually appearing to shrug the attack off, as well as the only one able to bring Godzilla to his knees and make him roar out in pain with just one attack.

Keizer Ghidorah trades Monster X's agility and his exoskeleton for even more power, being said to be the strongest member of the Ghidorah group in the Godzilla: Final Wars theater program, and is unfazed by any of Godzilla's attacks until the King of the Monsters is revitalized by Ozaki's energy. He is able to send Godzilla flying with a mere kick, clobber Godzilla with super-weight body presses (超重量ボディープレス), and easily lift him with his neck strength. Despite being slightly weaker than Monster X defensively, he is still completely unfazed by Godzilla's Atomic Breath.

Monster X can fire yellow electrical beams in rapid bursts from its eyes, an ability known as Gravitational Beam "Destroyed Thunder" (引力光線「デストロイド・サンダー」). These beams are fired from both eyes on Monster X's head and a single eye on each of the partial skull-like structures on his shoulders. These beams appear to be roughly equal in strength to Godzilla's atomic breath, and are able to visibly injure Godzilla.

Keizer Ghidorah possesses a more powerful variant of Monster X's gravitational beams, called the Antigravity Beam "Destroyed Keizer" (反重力光線「デストロイド・カイザー」). Keizer Ghidorah spits these beams in continuous streams from all three of his mouths. These beams are seemingly stronger than Godzilla's atomic breath. Keizer Ghidorah can also guide their paths and pick up and throw objects with them.

Keizer Ghidorah demonstrates the ability to directly siphon energy from Godzilla by biting down on him. His necks glow as the energy passes through them, in the case of Godzilla's energy a cyan color. However, Godzilla was able to break free after using the Keizer energy from Ozaki to overload Keizer Ghidorah's absorption, forcing him to release him.

Monster X floats down to the ground.

Monster X is capable of levitating for a short period of time, while Keizer Ghidorah is capable of full-on flight, although this is never shown in the film and is only demonstrated in Godzilla: Ongoing. 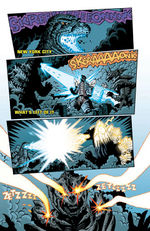 Monster X as he appears in Godzilla: Ongoing

Monster X appeared in the IDW comic Godzilla: Ongoing alongside SpaceGodzilla, Gigan and Hedorah. He first appeared in issue 8 where he attacked New York City before fighting Mothra. He managed to dispatch her before Boxer, Harrison and Asuka Hikari arrived in Kiryu along with Kumonga. After dispatching Kumonga, Monster X engaged in a brief fight with Kiryu before SpaceGodzilla and Godzilla showed up. In the battle that followed, Monster X transmogrified into Keizer Ghidorah where he started to gain the upper hand over the King of the Monsters. However, Rodan soon arrived to assist Godzilla, managing to decapitate one of Keizer Ghidorah's heads by creating a sonic boom from his wings. Eventually with Rodan's help, Godzilla was able to overcome and kill Keizer Ghidorah.

Keizer Ghidorah made an appearance in Godzilla: Rage Across Time #5, arriving in a meteor shower in the late Cretaceous period and defeating all of the various Earth monsters participating in a brawl. Keizer Ghidorah then transformed back into Monster X to fight Anguirus and Godzilla. He was nearly defeated by Godzilla, whom he tipped over into a volcano.

This is a list of references for Monster X. These citations are used to identify the reliable sources on which this article is based. These references appear inside articles in the form of superscript numbers, which look like this: [1]

Showing 43 comments. When commenting, please remain respectful of other users, stay on topic, and avoid role-playing and excessive punctuation. Comments which violate these guidelines may be removed by administrators.

↑ back to top ・ contents
Retrieved from "http://wikizilla.org/w/index.php?title=Monster_X&oldid=164530"
Categories: