For the form of Godzilla, see Super Godzilla (Monster).

Unlike most other Godzilla games of the era, Super Godzilla is not a pure action game. Instead, the player must guide the famed monster into the different levels by pressing the adequate button in the appropriate place. The game is split in two screens: the top one shows the actions Godzilla is making at the moment, while the bottom one shows his location on the current level. When Godzilla finds a monster to battle, the game switches into a standard side-view fighting segment. This game is famous for featuring Bagan, a monster that was considered for multiple scrapped films but never made an appearance outside of video games, and Super Godzilla, a more powerful form of Godzilla that influenced the design of SpaceGodzilla. 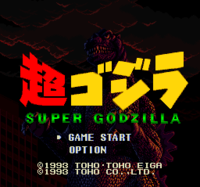 Invading aliens have now approached Earth, threatening all life. The fate of the world lies in the hands in a small group of people, who enlist the aid of Godzilla. Controlling the monster through a transmitter on the Super X2, players must lead Godzilla through several cities, taking him to fight a final boss that awaits at the end of each level. Aliens and monsters aren't Godzilla's only worries, as he will face smaller obstacles such as tanks, electricity towers, mines, and UFOs as well.

As the game goes on, Godzilla fights and defeats all of the aliens' monsters. After defeating their final monster, Bagan, he returns to the ocean. The human characters note that even though Godzilla saved the human race this time, he may yet return to threaten them in the future.

While praise was given to the story and graphics, Super Godzilla did not get very positive reviews. A common complaint among players is that the computer is given unfair advantages; it can make decisions much faster than an average player ever could, and will often overuse attacks in quick succession to eliminate the player. Additionally, if the player gets three game overs, he or she will have to start from the very beginning with no way to try again, as the game lacks a password system, nor a battery backup system.

This is a list of references for Super Godzilla. These citations are used to identify the reliable sources on which this article is based. These references appear inside articles in the form of superscript numbers, which look like this: [1]

6 months ago
Score 0
I honestly love this game. It's definitely got a learning curve, but I admire it's uniqueness and I think it's quite fun. The graphics look really nice too. It gets pretty nail biting, especially in the last three levels. It can get frustrating, but it's that kind where you really want to keep playing to beat it. I'm glad I got it all those years ago.
Permalink
You are ignoring the author of this comment
Show comment | Manage ignore list

“So let me try to summarize: You get close to the enemy, you punch him, then you go back and hit L and R to choose an attack. They don't tell you that, do they? They don't tell you you're supposed to press L and F**KIN' R! Why is it so hard to have two monsters fighting without it bein' a f**kin' Einstein project?” - AVGN

6 months ago
Score 0
Burning Godzilla. Godzilla becoming so powerful he's literally dying from his own power would be more powerful then just getting beefier.
Permalink
You are ignoring the author of this comment
Show comment | Manage ignore list

The soundtrack that plays during the Bagan fight is music to my ears. Such a good piece of gaming music.

29 months ago
Score 1
That Japanese art isn't as impressive as the cinematic sprites of Super Godzilla, but... it still looks pretty cool.
Permalink
You are ignoring the author of this comment
Show comment | Manage ignore list

37 months ago
Score 2
One of my favorite games growing up. Love it on YouTube.
Permalink
↑ back to top ・ contents
Retrieved from "http://wikizilla.org/w/index.php?title=Super_Godzilla&oldid=152729"
Categories: