Viras (バイラス,   Bairasu) is an alien kaiju who first appeared in the 1968 Gamera film, Gamera vs. Viras.

Viras began as an expedition force of aliens from Planet Viras who came to Earth in order to conquer it. After an earlier force was defeated by Gamera, the Virasians exploited the monster's affinity for children by kidnapping two Boy Scouts and holding them hostage. They lured Gamera into a position where they implanted a mind control device onto him and sent him on a rampage across Japan. When Gamera broke free of the mind control, the Virasians fused together into the gigantic Viras and battled him. The alien monster was finally defeated when Gamera flew him into the atmosphere and froze him, then dropped him into the ocean below where he exploded.

Viras' name comes from the planet from which he hails, Planet Viras. In an issue of Weekly Shonen Magazine published on March 17, 1968, Viras' home planet was instead called Planet Dongle (ドンガル星,   Dongaru Sei). Originally, the monster's name was going to be Gesso (ゲッソー,   Gessō), which likely came from the Japanese word for squid legs, gesō (下足). The name "Viras" was publicized as being chosen from a public contest published in Weekly Shonen Magazine and Weekly Bokura Magazine, which had five winners. However, director Noriaki Yuasa later stated that the contest was staged and the name actually came from the word bai (倍), meaning "times" or "fold." From this point until Gamera vs. Zigra, all of Gamera's enemies were publicized as having their names chosen in similar contests. While "Viras" is the official English spelling of Bairasu (バイラス), it is spelled Bairus in a Honolulu newspaper ad for Gamera vs. Viras and Bairas on a Japanese DVD cover for the film. The leader of the Virasian invasion force who later becomes Viras is called the Boss (ボス,   Bosu).

Viras' original subtitle was Space Monster (宇宙怪獣,   Uchū Kaijū), but this was changed to Underwater Monster (水中怪獣,   Suichū Kaijū) for Gamera: Super Monster due to the use of "Space Monster" in the film's Japanese title. 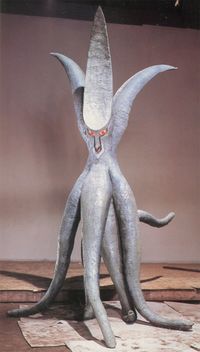 Viras was designed by Shigeo Mano and modeled by Masao Yagi and the modeling company Ex Productions. A miniature with a spear-tipped head and another stuffed miniature with movable tentacles were created in addition to the suit. According to Yagi, director Noriaki Yuasa stated he wanted "flexibility" in the monster's suit, and as such it was difficult to pick a primary material to create the suit from. Urethane was ultimately chosen and Viras was given a squid-like design. Yagi later stated he felt Viras was the "most impressive monster" in the Gamera series and said modeling Viras taught him that it was possible to get something right on the first try even when experiencing difficulty. Two of the Viras' suit's six legs contained the suit actor's legs, while the rest were stuffed and operated by wires.[4]

Viras is a squid-like monster with six prehensile tentacles lined with suction cups. His body is a light bluish-silver color. Viras' eyes are human-like and close from bottom to top. The monster has a pointed beak for a mouth, while the top of his head is divided into three petal-shaped pieces which can fit together into a hardened spear-shaped tip.

Viras originated as a group of five Virasians and their Boss who arrived on Earth in their UFO. Because the Virasians required nitrogen to survive, Earth was an ideal planet for conquest. When Gamera escaped their mind control, the Virasians fused with the Boss to become the gigantic monster Viras.

In the Dark Horse comic series Gamera: The Guardian of the Universe, Viras is a creature cloned from Gyaos' DNA by Dr. Greta Karbone.

Viras originated as the Boss, the leader of an expedition force of Virasians, set upon conquering the Earth who chose not to disguise himself. An earlier attempt by his kind was easily thwarted by Gamera, so the Boss employed a mind probe to discover Gamera's weaknesses. The Virasians discovered Gamera's kindness to children, and exploited it by kidnapping two Boy Scouts and using them as hostages, coercing Gamera to get into perfect position for the launching of the mind-control device. Gamera was then made to rampage through Japan, with the targets being the Okomasashi Dam and eventually Tokyo.

When the two boys were able to escape, Gamera broke free of the Virasians' mind control and attacked. The Boss fused with the other Virasians to become the giant Viras. After a fierce battle, Viras was defeated when Gamera flew with him up into the atmosphere, where he froze solid. Gamera then dropped Viras, and he exploded violently after colliding with the ocean.

Viras was utilized by the evil Spaceship Zanon to fight Gamera. However, Gamera triumphed.

Viras primarily attacks with his six prehensile tentacles which are lined with suction cups and can wrap around and restrain an opponent with ease.

The petal-like protrusions on Viras' head can form together into a spear-like tip capable of penetrating Gamera's shell.

Viras can both swim and fly, and does so by positioning his body horizontally.

In the Dark Horse comic Gamera: The Guardian of the Universe, Viras can fire a blast of electricity.

In Gamera: The Guardian of the Universe, Viras overtakes the mind of his creator, Greta Karbone, and bends her to his will. He is even able to temporarily control Gamera when Karbone comes into possession of an Atlantean magatama.

Viras is susceptible to being frozen. Gamera kills him by flying him up in to the atmosphere and freezing him solid, then dropping him into the ocean below which causes him to explode. In the Dark Horse comic, he is killed upon being impaled on the steeple of the Cathedral of Notre Dame.

Gamera: The Guardian of the Universe 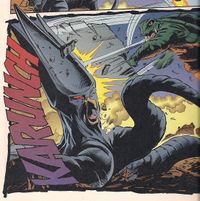 Viras in Dark Horse's Gamera: The Guardian of the Universe comic

After the battle between Gamera and Super Gyaos, Dr. Greta Karbone illegally purchased Gyaos DNA and several fissionable materials to begin experimentation to create her own army of Supermonsters, which included the monster Viras.

As her work on the monsters continued, Karbone began to inject her own brain and spinal fluids into Viras, and very slowly all other things in her life, such as the other monsters and her boyfriend Gusano, became inconsequential to Viras' will. The monster's telepathic abilities and the shared bodily fluids allowed Viras to directly overtake Karbone's mind, and made her into its faithful servant in its plan to enslave humanity. After Karbone's laboratory caught on fire due to the trickery of Dr. Mayumi Nagamine, whom Karbone had tried to recruit to help create the monster army, Karbone, under Viras' supreme influence, ordered Gusano to leave the other monsters to die and to save Viras. Gusano carried Viras' incubator jar on his back all the way to Karbone's mini-sub, where they attached it to the back and piloted it away into open water. Gusano was truly regretful that he had allowed Nagamine to destroy their work, but Karbone claimed this was nonsense, as they had saved the only thing that truly mattered: Viras.

After about a month at sea, Viras was fully grown and out of its tank. Because of its mind being connected to Karbone's, she became aware of energies that were only tangible to Supermonsters. Karbone used this knowledge to create a device to track them. Karbone planned to use these energies to take control of Gamera. Viras, in wait behind the sub bearing his faithful mind-servant used its beam attack to catch an Orca to eat. However, a conductor for the energies was needed to control Gamera, but Karbone located it in Paris, France, where Viras was finally unleashed. It began to destroy the city, with Karbone atop the Eiffel Tower, when Gamera arrived. However, Karbone's, and by extension Viras', control over Gamera caused him to fly into the path of incoming planes, missiles, and other attacks in an attempt to protect Viras and to buy time for humanity to surrender itself to Viras' control.

As Viras continued its rampage, Gamera continued to defend Viras. However, a Broomark Bio-Weapon hunter, who planned to sell Viras on her home planet, fired a super antithetic, but she missed, putting a battalion to sleep instead. Viras, in retaliation, shocked the ship, which caused it to speed away and go down as a result of a malfunction. However, during this time Karbone lost contact with the magatama, and Gamera attacked. Because Gamera had already sustained heavy fire, Viras easily defeated him with an electric blast before Gamera could launch a fireball. Gamera went down, and Viras continued its rampage. Gusano, after having a change of heart, used the alien's engine to reinvigorate Gamera at the cost of his own life. The ensuing explosion brought Gamera back to full strength, and he flew at Viras with a building in hand. Viras tried to shock it away, but Gamera slammed Viras' head with it, unfazed by the blast. Gamera then took one of Viras' tentacles in his mouth and flung the beast away. Viras quickly began to fall, and was impaled on the steeple of the Cathedral of Notre Dame, killing it.

This is a list of references for Viras. These citations are used to identify the reliable sources on which this article is based. These references appear inside articles in the form of superscript numbers, which look like this: [1]

↑ back to top ・ contents
Retrieved from "http://wikizilla.org/w/index.php?title=Viras&oldid=171540"
Categories: