Zigra (ジグラ,   Jigura) is an alien fish kaiju created by Daiei that first appeared in the 1971 Gamera film, Gamera vs. Zigra.

Zigra resembles a goblin shark, possessing a silvery gray, armor-plated hide, a pointed nose, a row of sharp fins on his back, as well as sharp pectoral fins.

Zigra is an alien creature hailing from a distant planet where fish feed on people. Zigra traveled to Earth in a spaceship with the intent of destroying Gamera and enslaving the human race.

In Dark Horse's Gamera: The Guardian of the Universe comic series, Zigra is instead a biological weapon from the planet Broomark which escaped to Earth and took refuge in the Pacific Ocean.

Zigra invaded the Earth with the intention of enslaving the human race and raising them like cattle. Like Viras attempted three films earlier, Zigra held a pair of human children hostage in order to force the human race to conform to his plan, but Gamera engaged him in battle. Gamera eventually threw him on land, using a rock to play his theme song on Zigra's dorsal fins like a xylophone before setting the alien shark ablaze with his fire breath.

In Gamera: Super Monster, Zigra fought with Gamera again in one of the many stock footage scenes. When Gamera hits his back with the rock, his theme song is not played, and is instead replaced by a new, simple tune. Zigra's fate is left unknown, as Gamera is never shown defeating him.

When in its land form, Zigra can fall flat on its stomach and use its fins as wings to fly through the air, usually to dive into the nearest available body of water. It can also use its legs to jump great distances, up to 200 meters.[2]

When out of the water, Zigra can convert its underside into legs and stand, achieving a "land form." Inversely, it can also transition back into its aquatic form.

Zigra has three separate sack-like organs located in the back of its head which are each able to produce a different form of light ray. These include an orange-colored Cell Activity Suspension Beam (細胞活動停止光線,   Saibō Katsudō Teishi Kōsen) fired from the third eye on its forehead which is capable of halting human cell activity, a green Fourth Dimensional Beam (四次元光線,   Yojigen Kōsen) which can transfer matter, and a red Earthquake-Inducing Beam (地震誘発光線,   Jishin Yūhatsu Kōsen) that can cause massive explosions and devastating earthquakes.[2] Zigra also possesses a tricolored beam attack, named the Tri-Color Ray Blast exclusive to Gamera: The Guardian of the Universe.

Zigra slices Gamera with its fins in Gamera vs. Zigra

With the exception of its aforementioned light beam attacks, Zigra relies almost entirely on its razor sharp teeth and fins. Its dorsal fins, referred to as Poison Fin Zoringen Dorsal Fins (毒びれゾーリンゲン背びれ,   Dokubire Zōringen Sebire), are immensely sharp cutting tools, said to be able to rip Gamera's body to shreds and cut oil tankers clean in half. Its teeth are also sharp enough to tear apart a YS-12 airliner.[2] In its land form, Zigra gains the ability to slap opponents with its fins or jab them with spikes.

Due to originally living in the dark ocean depths of its homeworld, Zigra is extremely weak to light, namely that of the sun.[2] It is also greatly susceptible to fire.

Gamera: The Guardian of the Universe 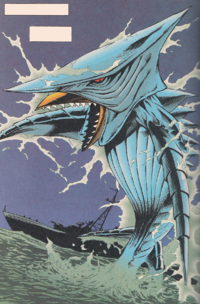 Zigra in Gamera: The Guardian of the Universe

Zigra was a a biological weapon from the alien planet of Broomark, that belonged to someone called "Lom Phlizium." Zigra was noted in its documentation to become unpredictable when startled. Unfortunately, it managed to escape and take refuge on the planet Earth, where it slept in the Pacific Ocean. However, a nuclear test by the French military roused Zigra from its slumber, and enticed it to attack. Zigra attacked a ship and cut its hull with its body, before shooting down approaching attack planes with its Tri-Color Ray Blast. It went back in the water for another attack, but as it leaped up it was hit by a fireball from Gamera. Briefly startled, Zigra watched as Gamera flew around for another attack, but with one blast of the Tri-Color beam, its assailant fell from the sky and began to sink to the ocean floor. All of this occurred while bioweapon retrieval specialist Freena was fast approaching to return Zigra to Broomark.

Just before Gamera hit the seafloor, an approaching submarine sent by the French hit him in the head with a torpedo, angering and awakening the beast. Gamera then blasted to the surface of the water and into the air faster than Zigra could react. Gamera bit Zigra's throat, and flew the injured monster across the ocean to the Pacific Ring of Fire, where he dropped the wounded Zigra into an active volcano west of Java, effectively killing it, much to Freena's dismay.

However, Zigra lived on in the nightmares of a Mr. Lutz, who had been onboard one of the attacked battleships. In the dream, Gamera had been killed, not by the drowning, but because of his magic amulet being broken, however his having done this had removed the Earth's only hope of defeating Zigra, and as such he had doomed the human race. Before he could really react to this news, Zigra hit him and Asagi Kusanagi with its Tri-Color Ray Blast, incinerating them both.

Zigra alongside Jiger, Iris, and Barugon in Kadokawa's Gamera vs. Barugon manga

Zigra makes a brief one-panel appearance alongside Jiger and Iris in Kadokawa's Gamera vs. Barugon manga, which is set between the events of Gamera 2: Attack of the Legion and Gamera 3: Revenge of Iris. Seen in a vision an explorer is subjected to inside a secret Atlantean ruin the original Barugon's skeleton was entombed in, it is implied Zigra was precursor to Gamera, a creation of the Atlanteans meant to combat the Gyaos.

This is a list of references for Zigra. These citations are used to identify the reliable sources on which this article is based. These references appear inside articles in the form of superscript numbers, which look like this: [1]

Showing 19 comments. When commenting, please remain respectful of other users, stay on topic, and avoid role-playing and excessive punctuation. Comments which violate these guidelines may be removed by administrators.

↑ back to top ・ contents
Retrieved from "http://wikizilla.org/w/index.php?title=Zigra&oldid=173999"
Categories: