Toto (トト,   Toto), acknowledged as Gamera (ガメラ) upon reaching adulthood, is a giant turtle kaiju who appeared in the 2006 Kadokawa Gamera film, Gamera the Brave. He is the reincarnation of Avant Gamera, who sacrificed himself to destroy a flock of Gyaos in 1973.

Toto's name might come from the word "tortoise." In-universe, Toto is given his name by Toru after a nickname his late mother used to call him. Once Toto grows to adulthood, he is acknowledged by several characters as Gamera (ガメラ), although Toru and the other child characters still call him Toto. Toru only refers to Toto as Gamera at the very end of the film as he flies away.

Toto is the reincarnation of Avant Gamera, who released his internal energy to self-destruct and destroy a flock of Gyaos in 1973. Gamera was reincarnated over a period of 33 years, eventually reappearing as a small turtle egg on top of a red gem on an island.[3][4]

In 2006, 33 years after Gamera sacrificed himself to stop a flock of Gyaos, a young boy named Toru discovered a turtle egg sitting atop a red gem on an island. The boy took the egg home along with the red gem it was sitting on. The egg hatched into a baby turtle, which Toru named "Toto", a nickname his later mother used to call him. Toto surprised Toru's neighbor when he started to fly. He soon became too big for Toru to take care of in his home, so he was taken to a shed on the shoreline. He disappeared the next day, but he returned to save Toru and his friends when Zedus attacked his village. He fought Zedus and drove him away, but he was seriously injured and captured by the military. Zedus arrived in Nagoya, and was confronted by Toto after he grew larger and escaped military custody. Zedus threw Toto into a building and was ready to kill him, but Toru arrived and tossed the gem found with Toto's egg into his mouth, which super-charged him and gave him the ability to fly and breathe fire. Toto battled Zedus again, and was able to rip out the beast's tongue and then destroy him with a fireball. Toto collapsed to the ground from exhaustion, and was surrounded by the military. Toru and his friends stood in front of Toto, giving him time to regain his strength and fly away. As Toto flew into the distance, Toru stared at him and said, "Sayonara, Gamera."

Even as a hatchling, Toto was able to breath fire, scorching a knife that fell in front of him. He fired a blast down Zedus's mouth during their first fight, causing the reptile to plummet from a bridge into the water below and retreat. After Toru threw the red stone which housed his egg into his mouth, he charged up and unleashed a more powerful fireball which completely obliterated Zedus.

As a hatchling, Toto could levitate, emitting a small amount of exhaust as he did so. After he grew to 30 meters tall and Toru threw the red stone into his mouth, he gained the ability to fly by retracting all his limbs into his shell and firing rockets out of his arms and legs holes. He used this ability to tackle Zedus off of one of the JR Central Towers.

Though born as a regular-sized turtle, Toto grew rapidly, becoming approximately eight meters tall for his first battle against Zedus. After the JSDF captured him and injected him with liquefied red pearls discovered around his birthplace, he grew to 30 meters tall for his rematch with Zedus. 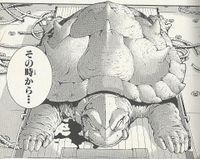 Toto is in the facility of Amemiya throughout the manga. The researchers try to find a way to help Toto to fight Zedus.

Rather than Gamera's unique roar, Toto's primary roar is an edited stock roar which dates back to the 1957 Universal Pictures films The Land Unknown and The Deadly Mantis and was also used for King Kong in the 1976 film and Yonggary in Reptilian. He is also given generic elk bugles and pre-recorded growls originally uttered by Frank Welker.

This is a list of references for Toto. These citations are used to identify the reliable sources on which this article is based. These references appear inside articles in the form of superscript numbers, which look like this: [1]

11 days ago
Score 0
my least favourite gamera. He looks a cartoon character from a 2000s TV show. And he's very weak
Permalink
You are ignoring the author of this comment
Show comment | Manage ignore list

11 days ago
Score 0
Ah, if only he was a 2000s cartoon character! Cartoon Network almost made it happen.
Permalink
You are ignoring the author of this comment
Show comment | Manage ignore list

4 months ago
Score -1
god Toto looks so adorable even in adult form! still looks better than Showa Minilla tho
Permalink
You are ignoring the author of this comment
Show comment | Manage ignore list

20 months ago
Score 0
Why they didn't reuse Gamera's iconic roar is beyond me, It's like giving Godzilla the Indominus's roar.
Permalink
You are ignoring the author of this comment
Show comment | Manage ignore list

Oh, I looked at the Comments Log and saw those of VaderRaptor and Theamazingdemo. Had to see what all the fuss was about. NOW I get it!

You do know that there's also a Toto from Wizard of Oz, right?
Permalink
You are ignoring the author of this comment
Show comment | Manage ignore list

41 months ago
Score 9
Toto is only called Toto when he's a little baby turtle. When he's the size of Zedus/whatever, he's already called Gamera.
Permalink
You are ignoring the author of this comment
Show comment | Manage ignore list

4 months ago
Score 1
must be confusing right?
Permalink
↑ back to top ・ contents
Retrieved from "https://wikizilla.org/w/index.php?title=Toto&oldid=180648"
Categories: