Godzilla: Great Monster Battle (ゴジラ怪獣大決戦,   Gojira Kaijū Daikessen) is a 2-D fighting game developed by Alfa System and published by Toho for the Super Famicom, released on December 9, 1994. It is the sequel to Godzilla: Battle Legends. An American version of the game called Godzilla: Destroy All Monsters was planned to be released in April 1995, but never was.

In the normal single player game, players are able to choose from Godzilla himself, Anguirus, King Ghidorah, Gigan, Megalon, Mechagodzilla, Biollante and Mothra. After selecting a monster, the player is taken to a map of Japan and must select an opponent to battle. Battles take place in the familiar 2D fighting screen popularized by Street Fighter 2, though the game plays more akin to the SNES Dragon Ball Z fighting games. Each round has a time period of sixty seconds during which each monster fights with a variety of attacks to wear their opponent's energy bar down and win the round. At the end of the round, the player's score is tallied up based on time, energy, and the level of their opponent. Once every enemy monster has been defeated, the player enters the eighth, final round and must face the Heisei Mechagodzilla or the Gotengo. Upon the defeat of one of those opponents, the credits roll and the game ends.

Each monster has a variety of standard and unique, special attacks and the ability to block. Standard attacks include light and heavy physical attacks (punch, kick, etc.) and varying degrees of energy-based attacks, a dash attack and a grab attack. Each monster also appears to have the ability to stun the opponent with a loud roar. As a succession of hits is landed, the monster will glow red, allowing a powerful super move to be unleashed. Monsters are able to use their projectile attacks to block oncoming projectiles, similar to Street Fighter 2, and sometimes the two clash in a brief test-of-strength encounter.

The game supports the standard two player versus mode, the only difference being the player's ability to select to play as the Heisei Mechagodzilla, Super Mechagodzilla, and the Gotengo, and to choose their own battleground. 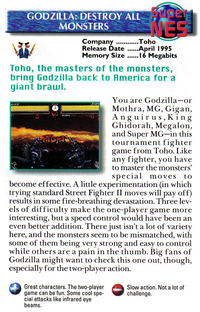 Teaser for Godzilla: Destroy All Monsters in the May 1995 issue of Nintendo Power

22 months ago
Score 1
I wish someone would remaster this game for American audiences. Or at least make a mugen version.
Permalink
You are ignoring the author of this comment
Show comment | Manage ignore list

Here's a better image of the Godzilla: Destroy All Monsters Nintendo Power advertisement:

I'd edit the page myself but I don't want to mess anything up. :P
Permalink
You are ignoring the author of this comment
Show comment | Manage ignore list

I found this image on my hard drive:

The HUD is different (looks like Battle Legends) and the stages look like earlier versions. I believe the image comes from an issue of EGM Magazine. Just thought it was kinda interesting.
Permalink
You are ignoring the author of this comment
Show comment | Manage ignore list

This is hilarious. I guess it could go in the gallery.
Permalink
↑ back to top ・ contents
Retrieved from "http://wikizilla.org/w/index.php?title=Godzilla:_Great_Monster_Battle&oldid=152958"
Categories: