Professor Sugimoto, a biologist, sends two scholars to Iwaya Village in the Tohoku region of Japan to investigate the appearance of a butterfly normally native to Siberia. The expedition ends in tragedy when the two men are killed under unexplained circumstances. The superstitious natives blame the mountain god Baradagi, an angle played up in the press. Yuriko Shinjo, a reporter and sister of one of the deceased students, intends to solve this new mystery and sets off for Iwaya Village with Horiguchi, a cowardly photographer, and Kenji Uozaki, one of Professor Sugimoto's pupils.

While hiking to the village, the trio meets Gen, a native boy, who brings the group to the site of a ritual meant to appease the wrath of Baradagi. A frightening noise sends the villagers into a panic and Chibi, Gen's dog, chases after the source of the bellowing sound. Despite pleas from the priest, Kenji leads Yuriko, Horiguchi, and a group of natives into Baradagi's forest to rescue the boy. Gen, his mother, and Chibi are reunited at the edge of the foggy lake. The reunion is short-lived, however, as a monstrous creature, identified as Baradagi by the natives, rises from the water and advances on the mountain village. The natives can only watch helplessly as the monster demolishes the small town before returning to the lake.

Professor Sugimoto deduces the creature is a Varanopode, a reptile family that had lived 185 million years ago, and gives it the name Varan. The Defense Agency dispatches troops to the lake to counter the threat. Chemical explosives are effective in luring Varan from the bottom of the lake but enrage the monster. Varan easily survives the artillery assault and the Defense Forces order a retreat, during which Yuriko is separated from her colleagues. Kenji manages to rescue her, and to evade the advancing monster the two take shelter in a nearby cave. Varan pursues them, finally distracted by the JSDF's flares long enough for the duo to get to safety. The monster climbs the mountain. It spreads its limbs, displaying a thin membrane that allows it to glide away.

Varan is next spotted in the Uraga Channel, heading southwest towards Tokyo. The combined forces of the Navy and Air Force set up a defense line to stop the monster at sea. Bombs, missiles, and depth charges all prove ineffective on the prehistoric monster. Scientists infer that Varan's tough exterior is responsible for its apparent immunity to conventional weaponry. It seems nothing will work against the creature until Dr. Fujimura reveals that has invented an explosive designed to demolish rocks from the inside out. The Defense Agency gets to work adapting it as a weapon while simultaneously evacuating the coastal regions of Tokyo in preparation for a full-out assault on Varan at Haneda Airport.

Varan surfaces and is met with a fierce barrage of artillery. Meanwhile, the JSDF rigs a truck carrying a payload of Dr. Fujimura's explosive to collide with the monster once it reaches the shore. Kenji drives the truck into position and escapes in the nick of time, but the explosive does no damage to the creature's hardened shell. A backup plan is devised to make Varan swallow the explosive attached to a flare, but the JSDF has to stall until the new device can be equipped on a helicopter. This second attempt proves successful: the charge detonates inside the monster's body, resulting in massive injuries to the creature. Mortally wounded, Varan crawls out to sea as a second charge detonates, killing the ancient menace.

Toho originally prepared Varan as a three-part television film with American cooperation, following the success of Rodan in the United States. Ken Kuronuma wrote the story, following a request by producer Tomoyuki Tanaka "to come up with something, anything" to fulfill the Americans' desire for another monster movie.[5] Shinichi Sekizawa, who would become one of Toho's go-to science fiction writers, handled the script, his first in the genre. Special effects director Eiji Tsuburaya conceived of Varan as a Godzilla-kappa hybrid, with designer Akira Watanabe adding the patagium of a gliding lizard.[6] Because it would be a television production, Toho decided to forego shooting in color (as with Rodan) and Tohoscope (The Mysterians). Principal photography lasted 28 days, a significantly shorter span than most Toho films at the time.[5]

After the American production company, believed to be the short-lived AB-PT Productions, backed out during filming, Toho decided to restructure the project as a theatrical release. New footage was shot and all Academy ratio footage that was already in the can was modified as "Toho Pan Scope,"[2] a process similar to SuperScope in which 1.37:1 footage is cropped during editing to 2:1 and reformatted for anamorphic projection. Akira Ifukube also recorded a brand new score for the theatrical version of the film.[7] Director Ishiro Honda was disappointed with the finished product, citing the difficulty of modifying the story and aspect ratio to Toho's new demands.[5] An incomplete reconstruction of the original television version was included as a special feature with Toho's DVD release of the film and was later ported to the Region 1 release from Tokyo Shock. 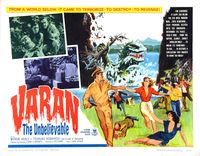 The American version of Varan, titled Varan the Unbelievable, was distributed theatrically in the United States by Crown International Pictures on a double bill with First Spaceship on Venus, beginning on December 7, 1962.[3] This version was a co-production of Dallas Productions and Cory Productions with Jerry A. Baerwitz producing and directing a script by Sid Harris.[3] Production of Varan the Unbelievable began under the title Odoroku on October 17, 1960, according to a report in the same day's issue of Daily Variety.[8] Baerwitz's film is radically different from the Toho version, perhaps out of necessity: the sound design of all Japanese footage utilized in the American release (totaling some 30 minutes) is either completely jettisoned and rebuilt or left completely intact, suggesting that the production companies might have had only the completed Japanese version from which to work.[9]

Harris constructed an entirely new story with new characters that still manages to follow the basic narrative of the Japanese version.[3] The bulk of the new material is about chemical desalination tests carried out by Commander James Bradley, U.S.N. (played by Myron Healey), on the fictional Japanese island of Kunishiro Shima. These tests ultimately disturb the monster—called "Obake" in dialogue—until it's subdued in the city of Onita (Tokyo in Toho's version). While Bradley and his wife (Tsuruko Kobayashi) become the focus of Harris's screenplay, the Japanese protagonists are still present in archive footage, albeit as "Paul and Shidori Iso," college friends of Anna Bradley. Notably, "Obake" is never seen flying in the U.S. release, although new special effects footage of the monster's claw was shot to replace a similar scene in the Japanese version.[9] Akira Ifukube's score is mostly deleted, with music editor Peter Zinner tracking in library cues such as portions of Albert Glasser's scores for Teenage Caveman and The Amazing Colossal Man.[3] Zinner later performed the same task on John Beck's Americanization of King Kong vs. Godzilla.[9]

New footage for the American release was filmed in the Totalscope process with an aspect ratio of 2.35:1.[2]

After its theatrical release, Varan the Unbelievable could be seen on television through the 1980s.[3] Two video releases from VCI (Video Communications, Inc.) followed in the 1980s and in 1994, the latter being the final official release of the American edition. A 2005 DVD release through Media Blasters featured Toho's original Japanese version.[9]

An English version of Varan, possibly different from the Crown International release and produced by Toho,[2] was advertised as available for export in the 1962 Toho Films Catalog.[10]

"Even among Americans fond of Japanese monster films," wrote Bill Warren in his book Keep Watching the Skies! American Science Fiction Movies of the Fifties, "the name Varan the Unbelievable carries little weight."[3] G-Fan reader polls have consistently ranked it in the lower echelon of Toho kaiju films, never giving it an average score higher than 6.1 out of 10. Elements singled out for praise are typically the Varan suit and Akira Ifukube's score.

Though Varan is not available on Blu-ray, an HD version can be rented or purchased on the Japanese versions of Amazon Video and iTunes.

This is a list of references for Varan (film). These citations are used to identify the reliable sources on which this article is based. These references appear inside articles in the form of superscript numbers, which look like this: [1]

10 months ago
Score 3
"A giant monster greater than Godzilla or Rodan! Exercising its power over the whole of Japan" Oh lol.
Permalink
You are ignoring the author of this comment
Show comment | Manage ignore list

12 months ago
Score 1
one of my favrote kaiju films
Permalink
↑ back to top ・ contents
Retrieved from "http://wikizilla.org/w/index.php?title=Varan_(film)&oldid=163519"
Categories: