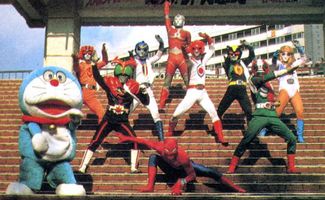 Tokusatsu (特撮,   Tokusatsu) is a Japanese word that literally means "special effects." It is primarily used to refer to live-action Japanese film and television dramas that make use of special effects.

The term "tokusatsu" is a contraction of the Japanese phrase "tokushu satsuei" (特殊撮影,   tokushu satsuei), meaning "special photography". In production, the special effects director is given the title of "tokushu gijutsu" (特殊技術,   tokushu gijutsu), Japanese for "special techniques" or "tokusatsu kantoku" (特撮監督,   tokusatsu kantoku), which is Japanese for "special effects director", the title usually used by English language productions.

Tokusatsu entertainment is often science fiction, fantasy, or horror, but movies and TV shows in other genres can sometimes be classified as tokusatsu as well. The most popular types of tokusatsu are kaiju monster movies (the Godzilla and Gamera film series), superhero TV serials (the Kamen Rider and Metal Heroes series), and mecha dramas (Giant Robo). Some tokusatsu television programs combine several of these subgenres (the Ultraman and Super Sentai series).

Tokusatsu is one of the most popular forms of Japanese entertainment, but most tokusatsu movies and television programs are not widely known outside Asia. In recent years, however, tokusatsu has begun to develop a small but loyal and growing fanbase outside of Japan.

Tokusatsu has its most distant origins in early Japanese theater, specifically kabuki, with its action and fight scenes, and bunraku, which utilized some of the earliest forms of special effects, specifically puppetry. Modern tokusatsu, however, did not begin to take shape until the early 1950s, with the conceptual and creative birth of Godzilla, one of the most famous kaiju (monsters) of all time.

The driving forces behind 1954's Godzilla were special effects artist Eiji Tsuburaya and director Ishiro Honda. Tsuburaya, inspired by the American film King Kong, formulated many of the techniques that would become staples of the genre, such as so-called suitmation — the use of a human actor in a costume to play a giant monster — combined with the use of miniatures and scaled-down city sets. Godzilla forever changed the landscape of Japanese science fiction & fantasy, and cinema, by creating a uniquely Japanese vision in a genre typically dominated by American cinema.

Godzilla kickstarted the kaiju genre in Japan, which remained extremely popular for several decades, with characters such as the aforementioned Godzilla, Gamera, and King Ghidorah leading the market. However, in 1957, the first film serial featuring the superhero character Super Giant was released, signaling a shift in popularity that favored masked heroes over giant monsters. Along with the anime Astro Boy (Tetsuwan Atom), the Super Giant serials had a profound effect on the world of tokusatsu. The following year, in 1958, Moonlight Mask (月光仮面,   Gekkō Kamen) premiered, the first of numerous televised superhero dramas that would make up one of the most popular tokusatsu subgenres.

Superheroes remained a viable and popular staple of entertainment during the 1960s, but were largely staid, with few of the programs distinguishing themselves from the rest of the lineup. This changed in 1966, with Ambassador Magma (マグマ大使,   Maguma Taishi) and Ultraman creating the Kyodai Hero genre, wherein a regular sized protagonist grows to larger proportions to fight equally large monsters.

Suitmation (スーツメーション, Sūtsumēshon?) is the term used in Japan to describe the process in tokusatsu movies and television programs used to portray a monster using suit acting. It is not known exactly where the term originated from; the term may have been used to differentiate the suit work from Ray Harryhausen's celebrated dynamation (stop-motion) technique. At the least, it was used to promote the Godzilla suit from The Return of Godzilla.

The many productions of tokusatsu series have general themes that are common throughout groups.

Kaiju (怪獣,   Kaijū, lit. strange beast) productions primarily feature monsters, or giant monsters (大怪獣,   Daikaijū, lit. large strange beasts). Such series include Ultra Q, the Godzilla film series, the Gamera series, the Daimajin series, and other films such as Frankenstein vs. Baragon, The War of the Gargantuas, and The X from Outer Space.

Kaijin (怪人,   Kaijin, lit. strange person) productions primarily feature Supervillains as the central character. This includes films such as The Secret of the Telegian, The Human Vapor, The H-Man, Half Human, and Invisible Man.

Productions that feature yōkai (妖怪,   Yōkai) feature central characters that can be called "apparitions", "spirits", or "demons" the Yokai Monsters series of films were a popular series of yōkai series.

Over the past half-century, there have been long running television series that are often a combination of several other themes. Tsuburaya Productions has had the Ultra Series starting with Ultra Q and Ultraman in 1966. P Productions began their foray into tokusatasu in 1966 with the series Ambassador Magma. They have also been behind the Lion-Maru trilogy which concluded in 2006. The Toei Company also has several series that fall under their Toei Superheroes category of programming, starting in 1961 with the single series, Moonlight Mask. Then, they produced several other long running series, starting with the Kamen Rider Series in 1971, the Super Sentai Series in 1975, the Metal Heroes Series in 1982, and several Mysterious Comedy series (不思議コメディーシリーズ,   Fushigi Comedī Shīrizu). Toho, the creators of Godzilla, also had their hands in creating the Super Star God series of programs from 2003 to 2006.

There are also various movies that are classified as tokusatsu but are generalized science fiction films. These include Warning from Space, Invasion of the Neptune Men, The Green Slime, The Three Treasures , The Last War, Submersion of Japan, Virus, Bye-Bye Jupiter, The War in Space, and Sengoku Jieitai 1549.

Non-traditional tokusatsu films and television programs may not use the conventional special effects or may not star human actors. Suitmation is characteristic of tokusatsu; however, some productions may use stop-motion instead to animate its monsters (e.g. Demon Hunter Mitsurugi (1973)). "Puppet shows" may use traditional tokusatsu techniques, but are cast with puppets or marionettes (e.g. Uchuusen Silica (1960), Ginga Shonen Tai (1963) and Kuchuu Toshi 008 (1969); Go Nagai's X Bomber (1980)). Some tokusatsu may employ animation in addition to its live-action components (e.g. Tsuburaya Productions' Dinosaur Expedition Team Born Free (1976) and Dinosaur War Izenborg (1977); Pro-Wrestling Star Aztekaiser (1976)).

As popular culture fandom in Japan grew in the 1980s, a fan-based group called Daicon Film (now called Gainax) was created by Hideaki Anno, Yoshiyuki Sadamoto, Takami Akai, and Shinji Higuchi. Besides anime sequences, they also produced a series of tokusatsu shorts parodying monster movies and superhero shows which has gained much media coverage. These productions include Patriotic Squadron Dai-Nippon (1983), Swift Hero Noutenki (1982), Return of Ultraman (1983) and The Eight-Headed Giant Serpent Strikes Back (1985).

In the turn of the new millennium, comedian Shinpei Hayashiya produced a number of tokusatsu fan films. These include Godzilla vs. Seadora and Gamera 4: Truth (2004). In 2005, he completed his upcoming first original effort, Deep Sea Beast Reigo.

Tokusatsu technique has been replicated outside of Japan due to the popularity of Godzilla films. In 1961, England made its own Godzilla-style film, Gorgo, which used the same suitmation technique as the Godzilla films. That same year, Saga Studios in Denmark made another Godzilla-style giant monster film, Reptilicus. This film's monster was brought to life using a marionette on a miniature set. In 1967, South Korea produced its own kaiju movie titled Yongary, Monster from the Deep. In 1975, Shaw Brothers produced a superhero film called The Super Inframan, based on the huge success of Ultraman and Kamen Rider there. The film starred Danny Lee in the title role. Although there were several other similar superhero productions in Hong Kong, The Super Inframan is the first. With help from Japanese SPFX artists under Sadamasa Arikawa, they also produced a Japanese-styled monster movie, The Mighty Peking Man, in 1977. In 2001, Buki X-1 Productions, a French fan-based production company, produced its own series, Jushi Sentai France Five (now called Shin Kenjushi France Five), a tribute to Toei's long running Super Sentai series. In 2004, Peter Tatara (with his company Experimental Amateur Hero Productions) produced a low-budget superhero video series called Johnny Robo, which is a tribute/deconstruction/parody of Kamen Rider and the Henshin Hero genre. The low-budget television series Kaiju Big Battel directly parodies kaiju and Kyodai Hero films and series by immersing their own costumed characters in professional wrestling matches among cardboard buildings. In 2006, the South Korean series Erexion premiered as a "children's special effects drama;" its style is reminiscent of tokusatsu techniques. In 2006, Mighty Moshin' Emo Rangers premiered on the internet as a Power Rangers spoof, but was quickly picked up by MTV UK for broadcast. In 2006, Insector Sun, a low-budget tribute to Kamen Rider was produced by Brazilian fans. In addition, a Thai Sentai-style series Sport Ranger began broadcasting on August 2006.

Godzilla, King of the Monsters! was first dubbed into English in 1956 (the sole addition to the movie was American actor Raymond Burr) and Ultraman gained popularity when it too was dubbed for American audiences in the 1960s.

The primary influx of tokusatsu adaptations came in the 1990s, starting in 1993 with Saban Entertainment's purchase of footage from Toei's sixteenth installment of their long-running Super Sentai series, Kyōryū Sentai Zyuranger to become Mighty Morphin Power Rangers and start the popular Power Rangers franchise. An adaptation of footage from Choujinki Metalder, Jikuu Senshi Spielban, and Uchuu Keiji Shaider, several series in the Metal Heroes series, became VR Troopers in 1994. This was followed by an adaptation of the ninth series in the Kamen Rider, Kamen Rider Black RX, into Saban's Masked Rider. In 1996 and 1997, Juukou B-Fighter and its sequel B-Fighter Kabuto became Big Bad Beetleborgs and its sequel Beetleborgs Metallix. DiC Entertainment, in 1994, purchased the footage for Denkou Choujin Gridman to become Superhuman Samurai Syber-Squad. Most recently, the twelfth Kamen Rider series, Kamen Rider Ryuki, was adapted into Kamen Rider Dragon Knight, which aired in 2008.

American production companies also had a hand in creating what are termed by fans as "Ameritoku." The syndicated series Tattooed Teenage Alien Fighters from Beverly Hills was a low budget attempt at competing with the Power Rangers. Saban's Mystic Knights of Tir Na Nog was an original production by Saban to emulate their own Power Rangers series. The syndicated Big Wolf on Campus and Nickelodeon's Animorphs are also described as "American Tokusatsu" due to the techniques they employed.

↑ back to top ・ contents
Retrieved from "http://wikizilla.org/w/index.php?title=Tokusatsu&oldid=161317"
Category: