Zedus (ジーダス,   Jīdasu) is a giant sea lizard kaiju created by Kadokawa that first appeared in the 2006 Gamera film, Gamera the Brave.

Zedus is a large aquatic saurian kaiju. He strongly resembles Jirass from Ultraman and also shares some similarities with Gorosaurus. Zedus has several thin fin-like protrusions running all the way from the top of his head down to his tail. Zedus has a large head with a retractable multicolored frill. He also has a very long powerful tail.

According to the book Heisei Gamera Perfection, Zedus' design and abilities were influenced by the monsters Barugon, Zilla, Jiger, and Varan.

Zedus' origins are never explored in his film appearance, however supplementary materials for Gamera the Brave reveal that Zedus was a type of semi-aquatic lizard that was mutated by feeding on the corpses of Gyaos.

A man-eating monster from the depths of the ocean, Zedus attacked several ships at sea before finally making landfall, causing all sorts of damage. Fortunately for what remained of the city, Toto, the young Gamera found and raised by a young boy, appeared. Zedus unleashed its spear-like tongue on Toto while they battled. After several missed, Toto grabbed the tongue and held on as it pulled back into his maw. The creature was blasted in face with a ball of fire, sending the monster into the sea below.

Zedus returned in full force, attacking the complex that Toto was being held in before unleashing his wrath on the rest of Nagoya. The two clashed once again, and like before, Zedus was quickly getting the upper hand. Overpowering the turtle with brutality, the creature tossed Toto into a building. The hero's body now stuck in the building, Zedus began to climb up.

Zedus had no idea that Toto had just been empowered by the jewel that gave him birth and was knocked off of the building by the flying Toto. Quickly getting to his feet, he lashed out with his tongue yet again, this time impaling it through Toto’s shoulder. As the two struggled on, Toto ripped the tongue in half and unleashed a powerful fire ball. The ball of flames quickly engulfed the creature and blew it into bloody pieces.

Zedus' most powerful weapon is his elongated tongue. It can reach up to 100 meters in length, and can be launched in a spear-like attack. The tip of his tongue can emit a strong biological acid.

Zedus can emit a powerful biological acid from his claws and the tip of his tongue, allowing him to penetrate Toto's shell with ease.

Zedus can leap up to 200 meters by using his powerful legs. He is also agile enough to climb buildings and other structures.

Being a mutated aquatic lizard, Zedus is capable of swimming underwater as well as moving on land.

Zedus can use his claws, teeth and tail in combat.

Zedus shrugged off a close range fireball attack from Toto, although it did cause him to retreat.

Zedus first appeared at a height of 30 meters when he reached Shima, but after being defeated by Toto he retreated. When he reached Nagoya his height, length and mass had all nearly doubled. 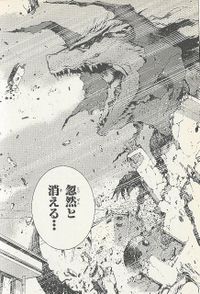 Zedus makes a brief appearance in this manga, being mentioned by the main characters.

This is a list of references for Zedus. These citations are used to identify the reliable sources on which this article is based. These references appear inside articles in the form of superscript numbers, which look like this: [1]

↑ back to top ・ contents
Retrieved from "http://wikizilla.org/w/index.php?title=Zedus&oldid=163533"
Categories: