Karakasakozo generally resemble an umbrella with one eye in the center of their face, a long tongue and one to two long legs, typically wearing sandals.

A Karakasakozo was first seen when it came to life from a man's drawings. It danced and played with the man, before vanishing.

In this film, the Karakasakozo has an important role, and is one of the protagonists. It is the second yokai seen in the film. It helped in the first battle with Daimon, but it to was defeated. It also helped organize the spirit army for the final battle with Daimon. As the yokai of Japan fought against Daimon and his many clones, Aburasumashi struggled to find the true Daimon. After finding it, Aburasumashi asked a Karasutengu for help, and the two were sent skyward by a gust of wind. Along with two other yokai, Aburasumashi stabbed Daimon in the eye. With the threat of the Babylonian demon gone, the Karakasakozo joined its fellow yokai in celebration. 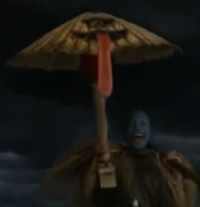 Bakekasa being held by Aburasumashi in
The Great Yokai War

The Karakasakozo, called Bakekasa here, makes a cameo when all of the various other yokai begin formulating a plan to take action against their mindless machine counterparts. It complained that it already partook in one war and that was enough. It later was summoned to the giant festival mistakenly being held on the antagonist's base, carrying Aburasumashi as it did during the war against Daimon.

↑ back to top ・ contents
Retrieved from "http://wikizilla.org/w/index.php?title=Karakasakozo&oldid=160004"
Categories: