The Kappa (河童, lit. River Child) are a race of amphibious yokai from Japanese legend that made appearances in the 1968 Daiei film, Yokai Monsters: Spook Warfare, the 1974 Toho series, Go! Kotaro Ushiwaka, the 2006 Kadokawa film, The Great Yokai War, and the 2010 Nikkatsu film, Death Kappa. Kappa are among the most well-known yokai outside of Japan, and have appeared in countless pieces of media as a result.

The Kappa is a small, reptilian creature with a pool of water on its head, and 'leaves' running around the rim of its pool. The Kappa also has a beak, which gives it a vaguely avian appearance.

While the Kappa himself didn't appear in the first of the Yokai Monsters saga, there is mention of the mischievous water imps. 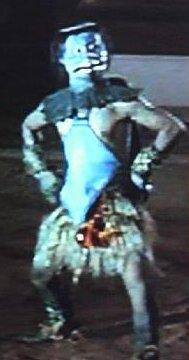 In this film, the Kappa and his kind have one of the most important roles in the whole film, and is one of the protagonists. He was the first yokai to challenge Daimon, getting his head dish severely burned while doing so. The Kappa then went to the other yokai for help, and though the others seemed to feel that he was suspicious at first, he rallied the troops. He was thought to be killed in the large assault on Daimon when his head dish caught fire, with Daimon setting fire to the pond he dove into to try and extinguish the flames. It was later revealed he was perfectly fine and simply hid below the water. Besides him, there were many Kappa that were in the spirit army that fought against Daimon and his illusions, using their water powers to douse Daimon's fire.

Yokai Monsters: Along with Ghosts

Much like 100 Monsters, the Kappa isn't seen, but is mentioned. It is possible there are Kappa in the massive crowd scenes of yokai spying on two bandits.

A Kappa appears in Go! Kotaro Ushiwaka as an enemy monster and ally of Coonjo.

Much like he did in the Showa series, the Kappa played a major part in the Great Yokai War of 2006. He was one of the first yokai to respond to the call when the yokai found out that their species were being turned into mindless machines. Unlike the Showa Kappa, this one had no powers besides reverting back to his normal size when being crushed by a boulder.

In this film, the Kappa is looked after by a woman, but is wanted by a band of criminals and mutant fish men. They threaten to use a bomb to destroy all of Japan, and eventually do set it off. However, one of the fish men is caught in the explosion and is mutated into the monster Hangyolas. Fortunately, the Kappa was also mutated into Death Kappa and was able to subdue the rampaging titan. After its fight with Hangyolas, it was soothed by its childhood friend who sang it a song and poured water on its dish. The Kappa, losing its red eyes, slowly disappeared into the ocean.

A Kappa in Godzilla: Rage Across Time #1

A Kappa is briefly seen on the side of a road in the first issue of Godzilla: Rage Across Time as Akio and Gorou Suda travel to the Shobijin temple.

one month ago
Score 0
Also did toho get the license to put kappa in a godzilla comic? Ik its supposed to be like a easter egg and stuff but still
Permalink
You are ignoring the author of this comment
Show comment | Manage ignore list

2 months ago
Score 0
That article is nearly four years old and it doesn't say anything about a modern movie being made.
Permalink
You are ignoring the author of this comment
Show comment | Manage ignore list

That's not the right source, but it is happening. The film is called The Great Yokai War: Guardians, directed by Takashi Miike and co-produced by Toho and Kadokawa.
https://www....165303166025
https://movi...co.jp/yokai/

51 months ago
Score 0
inb4 another Kappa meme.
Permalink
↑ back to top ・ contents
Retrieved from "http://wikizilla.org/w/index.php?title=Kappa&oldid=174425"
Categories: