Pteranodon is an extinct genus of large pterosaur that lived during the late Cretaceous period. It is one of the most famous and well-known prehistoric reptiles from the time of the dinosaurs. This genus of pterosaur has been featured in numerous science-fiction and giant monster films, and is the basis for the popular Toho kaiju, Rodan.

After defeating the cave serpent, King Kong followed Ann Darrow onto the cliff outside his lair, where she was attacked by a Pteranodon, which tried to carry her away. Kong attacked the pterosaur, freeing Ann. Jack Driscoll reached the cliff and rescued Ann while Kong battled the Pteranodon. After killing the Pteranodon, Kong tried to pull Ann and Jack back up by the vine they were climbing down, only for them to jump into the river below and escape unharmed. 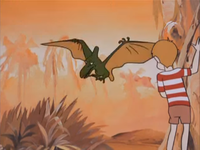 Bobby Bond sees a Pteranodon in The King Kong Show

A Pteranodon appears in the pilot episode, swooping in to catch an armadillo.

A Pteranodon in The Last Dinosaur

A flock of large Pteranodon were some of the creatures discovered during the Polar-Borer expedition. They were among the first surviving animals to be observed by the crew. One Pteranodon gave them a scare during the expedition's first night, flying low near their fire.

A scientific team led by Hiroshi Omae was called to the irradiated Adonoa Island in the Bering Sea after a group of Russian petroleum surveyors discovered a Pteranodon skeleton along with a nest containing what appeared to be an intact Pteranodon egg and one that had had hatched. When the scientists attempted to bring the intact egg back to Japan, the creature that hatched from the other egg, the irradiated and gigantic Pteranodon known as Rodan, attacked them. When Godzilla came ashore on the island and battled Rodan, the scientists were able to escape with the egg, which turned out to hold a baby Godzillasaurus instead of a Pteranodon.

A Pteranodon in Rebirth of Mothra III

Shortly after Rainbow Mothra traveled back to the Cretaceous period, a Pteranodon flew past him.

In the year 2009, a species of gigantic pteranodon with a 70 foot wingspan[1] lived on Skull Island, and checked out a group of humans on the beach, but took no interest, and flew back into the jungle. They subsisted on giant fish that lived in the island's waters. They are not true pteranodons, but were identified as such by Ann Darrow after she escaped the island while being shown photographs of prehistoric creatures.

This is a list of references for Pteranodon. These citations are used to identify the reliable sources on which this article is based. These references appear inside articles in the form of superscript numbers, which look like this: [1]

↑ back to top ・ contents
Retrieved from "http://wikizilla.org/w/index.php?title=Pteranodon&oldid=174268"
Categories: