The Lord Howe Monster is a giant, humanoid crustacean who appeared in the fifteenth issue of Dark Horse Comics' series, Godzilla, King of the Monsters.

Godzilla, King of the Monsters #15

Dr. Yamazaki allowed four people to view her abomination in its containment area on her island base. The massive mutant, the Lord Howe Monster, was a terror she planned to release on the world. A button was pressed, and the crustaceous creature was unleashed! It ravaged a cruise ship in the island's bay, as it began its long journey to Sydney, Australia.

Meanwhile, Godzilla stood like a monolith on the Sydney shore. It’s mind seemed distant, as though it were awaiting some unknown event. Suddenly, a G-Force satellite spotted a large, unidentified object heading for the coast! It emerged from the surf, and gazed deeply into its quarry's saurian soul. The epic battle between the Lord Howe Monster and Godzilla had begun.

The loathsome, lobster-like leviathan fired its optic lasers at Godzilla and struck the gruesome gargantuan across the face. Retaliation came in the form of Godzilla's atomic ray, but the malicious monstrosity rose and slammed its foe into the Sydney Opera House. The immense invertebrate continued to push its adversary into the heart of the city, knocking him to the ground, but Godzilla countered with a swing of his tail, sending his opponent off balance. Taking advantage of the situation, the thundering theropod blasted his foe into a building, and slammed its head with a train. The contemptible crustacean gripped Godzilla's neck, and began to continually blast the beast with its eye lasers. Godzilla roared in agony, and it seemed as though the king of the monsters was about to be dethroned; however, the powerful colossus managed to procure in his claws one large pincer and tear it from the thorax of the Lord Howe Monster, killing the beast. Victorious, Godzilla returned to the sea, leaving his latest victim dead in his wake. 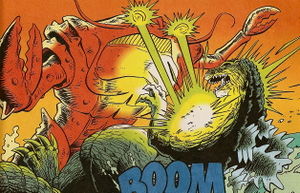 The Lord Howe Monster possessed the ability to fire powerful emerald energy beams from its eyes, which never failed to knock Godzilla off his feet.

Its shell was also quite tough, as it showed no damage from Godzilla's atomic ray.

Naturally, as a crustacean, the Lord Howe Monster was quite adept at swimming.


↑ back to top ・ contents
Retrieved from "http://wikizilla.org/w/index.php?title=Lord_Howe_Monster&oldid=161179"
Categories: