Stegosaurus is a famous genus of extinct large herbivorous dinosaurs that lived during the late Jurassic period. A Stegosaurus appears in the 1933 film King Kong, as well as various other Kong media, and photos and models of Stegosaurs appear in the Godzilla franchise. 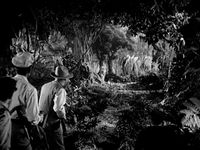 The Venture crew encounter a Stegosaurus in King Kong (1933)

While the crew of the Venture pursued King Kong through the jungles of Skull Island, they came upon a foraging Stegosaurus, which charged at them when it noticed their presence. Before it could draw too close, Carl Denham incapacitated it with a gas bomb. The creature fell over from the impact of the explosion and writhed on the ground for a bit before Denham approached and shot the beast in the head. 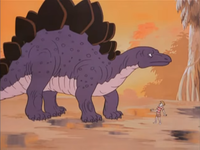 A Stegosaurus in The King Kong Show

While grazing in the jungles, a Stegosaurus was happened upon by a group of sailors from the Wanderer, who were tracking Kong in hopes of rescuing Ann Darrow. Fearful of what the beast might do, they incapacitated it with gas bombs before Carl Denham shot it twice through the heart, and left the carcass behind as the party continued their search.

At some point after the death of Kong, A Stegosaur was found by a Meat-Eater while drinking at a popular watering hole. Unfazed, the Stegosaur warded the beast off by threatening it with its spiked tail. In the year 2009, the Stegosaurs continued their lives on Skull Island. They came in contact often enough with the island's Giant Gaur for it to become routine for herds to part at a watering hole to allow a Stegosaurus to drink before filling their chaotic ranks back in around it.


↑ back to top ・ contents
Retrieved from "http://wikizilla.org/w/index.php?title=Stegosaurus&oldid=127967"
Categories: