Dororin (ドロリン,   Dororin) is a shapeshifting kaiju created by Toho that first appeared in the 1997 television series Godzilla Island. He is the primary antagonist of the show's 16th story arc.

Dororin is a small, glowing blue orb. After absorbing dirt from Matango Island, he is portrayed by an 8-inch figure of the monster Kumasogami, only brown with yellow highlights instead of black with red highlights.

Dororin's name bears a similarity to the Japanese onomatopoeic term Dorodoro (ドロドロ), used to denote the sound of something flowing.[1] This is fitting, given Dororin's primary ability to shapeshift.

After Landes unsuccessfully tried to persuade Gigan to join her in conquering Godzilla Island, the Giant Dark Emperor provided her with a new kaiju pawn, Dororin. He landed on Matango Island and absorbed dirt from his surroundings to construct a monstrous body. Spotting Gigan, he transformed into Godzilla and smashed a rock over the cyborg's head. He then took on Gigan's form and flew off to Godzilla Island, where he bashed Godzilla with a rock as well.

Now convinced each had attacked the other, Godzilla and Gigan fought it out. Meanwhile, Dororin targeted G-Guard Base with his eye lasers. Besuke Jinguji, at the controls of Mechagodzilla, managed to blast him to pieces, but the kaiju instantly reformed. As Misato Jinguji analyzed Dororin's composition, Nao Koda used Moguera to convince Godzilla and Gigan to join forces against the real threat. Godzilla arrived first, with Gigan bailing him out as Dororin's teleportation ability proved formidable. Mechagodzilla withdrew and Misato announced their foe's weakness: water. Piloting Fire Fighter Jet Jaguar, she used a giant fire hose to turn the dirt surrounding Dororin to mud. He tried to fly away, only to be shattered by Gigan. 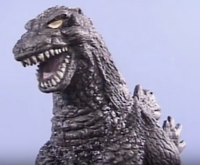 Dororin's dirt body can take on the forms of other monsters.

Dororin can fly and travel through space in his base form. He was also able to fly while disguised as Gigan. 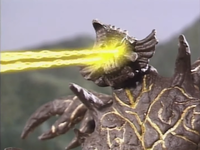 Dororin firing lasers from it eyes

Dororin's dirt body can fire yellow lasers from its eyes.

While Dororin's dirt body is easily destroyed, it can reform around him within seconds. He can also dissolve and reform it at will, allowing him to effectively teleport.

Dororin's dirt body loses its ability to reform around him when exposed to water. Without that protection, he is extremely vulnerable.

This is a list of references for Dororin. These citations are used to identify the reliable sources on which this article is based. These references appear inside articles in the form of superscript numbers, which look like this: [1]

↑ back to top ・ contents
Retrieved from "http://wikizilla.org/w/index.php?title=Dororin&oldid=153309"
Categories: