Needlar is a hybrid of sorts and draws traits mainly from horses as well as insects. His head is shaped like that of a horse and has a long, dark brown mane which drapes down the back of it. Near his mouth, two short mandibles can be seen which spread apart when his jaws are open. Needlar does not have ears, but in their place are two insect-like antennae. These appendages rest directly behind his orange, robotic looking eyes. Needlar's entire body is a dark turquoise color, but is mostly covered in metal panels. However, part of Needlar's insides can be seen from the left side of his body; red wires run out from the hole over to another exposed part on the opposite side. Finally, Needlar has a short lock of hair starting on his back side which resembles a horse's tail.

Needlar can create large shurikens which when thrown will embed themselves into their target and eventually self destruct.

Needlar wields a giant blow gun which when held up to a hole in his neck will fire powerful darts.

Needlar can create a triangular sword out of thin air.

Needlar can fire a beam of energy from his hands which can constrict any enemy it comes in contact with.

Like most Terror-Beasts, Needlar can breath a concentrated stream of fire from his mouth. 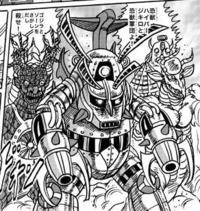 Needlar along with Zone Fighter, the Garogas, and several other Terror-Beasts appeared in a volume of the fanmade manga, Goji-Maga.

This is a list of references for Needlar. These citations are used to identify the reliable sources on which this article is based. These references appear inside articles in the form of superscript numbers, which look like this: [1]

35 months ago
Score 0
If you guys have fan stuff, where's Raia.
Permalink
↑ back to top ・ contents
Retrieved from "http://wikizilla.org/w/index.php?title=Needlar&oldid=151413"
Categories: