Yamata no Orochi (,   Yamata no Orochi, lit. Giant Eight Branched Snake) is an eight-headed serpent from Japanese mythology. It made appearances in the Toho films The Three Treasures and Orochi, the Eight-Headed Dragon, and exists within the continuity of Legendary Pictures' MonsterVerse.

Yamata no Orochi's name literally translates from Japanese as "Giant Eight Branched Snake," though by convention the English translation is typically given as "Big Snake of Eight Branches." While the creature's name is typically spelled in kanji characters, in Orochi, the Eight-Headed Dragon it includes a furigana katakana spelling above the kanji, as is the case for most of the characters in the film. While the most common kanji spelling for the creature's name is 八岐大蛇, which is the spelling used in both The Three Treasures and Orochi, the Eight-Headed Dragon, it is also sometimes spelled as 八俣遠呂智 or 八俣遠呂知, both of which are also read Yamata no Orochi. The creature is often referred to as just Orochi (大蛇,   Orochi) for short, an archaic reading of the two kanji which together mean "giant snake" and are typically otherwise read as daija.

In The Three Treasures, Orochi looks like a giant snake with eight heads, with eight small tails extending from the main one. Its scales are gray in color. In Orochi, the Eight-Headed Dragon, Orochi is now red with horns on its heads, legs, and a single large tail, with small spikes sticking out from the sides.

Orochi in the Showa era shares the same story as the Orochi from mythology, with his role in the movie being a description of that event. Every year he would arise from a lake to consume a child of the earthian deities. After consuming eight vats of sake set out for him, Susano was able to trap Orochi's heads in a tree, forcing the serpent to attack with his tails. After Susanoo stabbed his sword into Orochi's tail twice the monster died, allowing the storm god to retrieve the sword Murakumo.

Orochi was the god Tsukuyomi, lord of the underworld and God of the Moon, who transformed into this monstrous form ten thousand years ago and used it to attack the Earth. All of this was done in jealousy of his sister Amaterasu, goddess of heaven and the sun. He destroyed cities and mountains until he was stopped by his brother Susano, god of storms and the sea, his father then banished from Earth in a prison of ice. Thousands of years later, Tsukuyomi returned to Earth and was revived thanks to his servant, a transformed sentient broken fang who died soon after. After breaking free on the moon, he raised his castle but was bested by Yamato Takeru and Oto, who held the 'spirits' of his two siblings. Angered, Tsukuyomi transformed into Orochi to kill the Yamato Takeru and Oto, but they were saved by Amano Shiratori, the servant of the Sun goddess. However Orochi threw the two into space via a blast, but Takery fused with Oto and two sacred treasure to become Utsuno Ikusagami. Utsuno Ikusagami fought Orochi, and won. Tsukuyomi was trapped on the moon and sealed into Takeru's pendant and cast into space on the orders of Susano who said that upon his return Tsukuyomi would be reformed.

According to Teruaki Takeda, King Ghidorah was known in ancient times as Yamata no Orochi. He fought Godzilla in an underdeveloped form, sporting only three heads out of eight.

Residing at Monarch Outpost 91 at Mount Fuji in Japan, Yamata no Orochi was one of the many Titans who began to attack humanity under the direction of King Ghidorah. It was later pacified when Madison Russell activated the Orca at Fenway Park.

Tsukuyomi is a god and presumably has various supernatural abilities stemmed to that fact. Before he was only defeated by his brother, a fellow god and by Takeru, who was given a power to counter his.

As a god, Tsukuyomi is immune to the withering effects of time. He also survived trapped in ice for millenia and both of his defeats.

The counterforce to Takeru's 'Wild Spirit', it manifests as beams from his eyes. It's power is unknown but Susanno said it was impossible to defeat him without the Wild Spirit to defeat his calm Spirit. Presumably only his siblings could match his power and only his father and older gods surpassed his.

Tsukuyomi manifested his armor and raised a castle of complex architecture from the Earth through nothing but his will. These creations were not illusion and real to the point they could survive his absence.

Tsukuyomi teleported from the Moon to Earth, he also teleported out of his armor when he transformed into Orochi.

Tsukuyomi can shapeshift, he used this power to become Orochi and given that his servants powers stemmed from him, he can presumably take on the appearance of others. 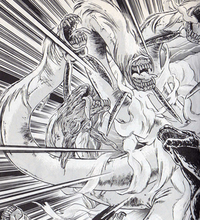 In this comic by a series of illustrators including Hurricane Ryu Hariken, Orochi appears as an opponent of Godzilla. 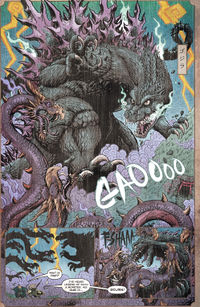 In 1274, the Nebulans joined forces with the Mongols to invade Japan. Two monsters under the aliens' control, Gigan and Megalon, led the offensive. Japan's greatest warriors, Gorou Suda and Akio, traveled to the Shobijin Temple in the hopes of awakening a force powerful enough to save their country. After killing the Heikegani guarding the temple, the duo faced Yamata no Orochi. The Shobijin then appeared before them, advising them to control the dragon instead of destroying him. They blessed one of Akio's arrows, which she fired at one of the monster's heads. Though the resulting explosion pacified Orochi, it also awakened the dreaded Godzilla. The Shobijin presented Suda with a statue of Orochi which would allow him to direct the monster. Before he could do so, however, Godzilla confronted Orochi and quickly killed him with his atomic breath. With no other option, Akio shot Godzilla with another enchanted arrow to get his attention, allowing her and Suda to lure him towards Gigan and Megalon.

This is a list of references for Yamata no Orochi. These citations are used to identify the reliable sources on which this article is based. These references appear inside articles in the form of superscript numbers, which look like this: [1]

Showing 32 comments. When commenting, please remain respectful of other users, stay on topic, and avoid role-playing and excessive punctuation. Comments which violate these guidelines may be removed by administrators.

↑ back to top ・ contents
Retrieved from "http://wikizilla.org/w/index.php?title=Yamata_no_Orochi&oldid=163548"
Categories: