Mother Longlegs are gigantic spider-like creatures that stand around 20 feet tall. They possess incredibly long legs that resemble bamboo stalks, allowing them to blend in seamlessly with the surrounding forests, with their legs posing as plants and their upper bodies held high above the canopy. Mother Longlegs' faces resemble skulls, being white in color with large black eyes. In addition to their eight legs, Mother Longlegs possess two additional limbs located closer to their heads, which are equipped with pincer-like claws. In Skull Island: The Birth of Kong, there is an individual Mother Longlegs which is larger than the others and possesses a horned crest, possibly a matriarch of some sort.

While Preston Packard and his men were passing through a dense bamboo forest on Skull Island, one of the soldiers was impaled through his mouth by the leg of a Mother Longlegs. The other soldiers looked up at the canopy and saw the colossal arachnid's body moving across the treetops. They immediately opened fire on the creature, which retaliated by trying to stab the men with her legs and using the tentacle-like structures in her mouth to try and eat them. The soldiers retaliated by slicing off the tips of the Mother Longlegs' limbs with machetes and firing on her cephalothorax, with the latter finally toppling her. Packard approached the fallen creature and fired several rounds into her head with his pistol until she died.

Mother Longlegs are perfectly adapted for camouflage in the dense forests of Skull Island. With their limbs resembling bamboo stalks and their bodies held high above the forest canopy, Mother Longlegs blend in seamlessly with the forest, allowing them to attack unaware prey that passes through their territory.[3]

The Mother Longlegs' legs are razor-sharp, and can be used as deadly spears. Once a Mother Longlegs uses its legs to immobilize its prey, it will use them inject venom into its victim's body and start to absorb nutrients from it.[3]

The Mother Longlegs can release muscular tendrils from their underbelly to ensnare immobilized prey and drag them into their open stomach.[1]

Due to being an all-female species, the Mother Longlegs are capable of asexual reproduction.[3]

The Mother Longlegs is not particularly durable, as its legs are easily severed by knives and bullets. Once the Mother Longlegs' legs were removed and it was brought to the ground by gunfire, she was swiftly killed by Packard. Multiple Mother Longlegs were nowhere near a match for King Kong, who easily killed all of them in a relatively short struggle. 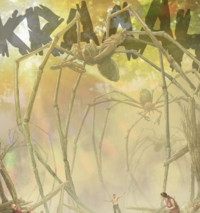 Mother Longlegs in Skull Island: The Birth of Kong #4

Several Mother Longlegs entered the Iwi village in 1995 after Walter R. Riccio blew open the wall with explosives. The creatures killed several people, including Evgenij Medov, before Kong arrived to save the villagers. Kong easily killed all of the Mother Longlegs and the man responsible for bringing them into the village, then left after meeting Aaron Brooks face-to-face.

This is a list of references for Mother Longlegs. These citations are used to identify the reliable sources on which this article is based. These references appear inside articles in the form of superscript numbers, which look like this: [1]

↑ back to top ・ contents
Retrieved from "http://wikizilla.org/w/index.php?title=Mother_Longlegs&oldid=164967"
Categories: