Servum (セルヴァム,   Seruvamu) are Godzilla spawn kaiju who first appeared in the 2017 animated Godzilla film, GODZILLA: Planet of the Monsters.

A subspecies of Godzilla that evolved during the course of the monster's 20,000 year reign over Earth, the Servum were the most common fauna seen inhabiting what was once Japan when the crew of the Aratrum returned to Earth. A flock of flying-type Servm menaced the United Earth's Earth Landing Brigade, causing major damage to their ranks despite eventually being fought off by Powered Suits. More Servum appeared to attack the United Earth's Hover Bike squadron during their battle against another Godzilla subspecies, Godzilla Filius, but were eventually repelled. After Godzilla Earth emerged and decimated the United Earth's troops, survivors encountered numerous worm-type Servum in a marsh. After the smaller Servum were slain, flying-type Servum arrived to feed on the carcasses and soon turned their attention toward the humans, only to be defeated by a Multipodal Battery commandeered by Metphies. Two flying-type Servum were encountered near the foot of Mount Fuji, but were subsequently killed and assimilated by Mechagodzilla City's Nanometal. The United Earth experienced no more confrontations with Servum, although many flying-types were seen fleeing when Ghidorah appeared in the sky, and later were present flying around the victorious Godzilla Earth.

The Servum's name is derived from Latin, and is the gender-neutral accusative singular form of "servus," which means "servant" or "slave." They are never referred to by name in GODZILLA: Planet of the Monsters nor GODZILLA: City on the Edge of Battle, but rather simply addressed as "them" or "those things," though they are at one point referred to as "lizard things." When Adam Bindewald reports to Mulu-elu Galu-gu following the Servums' attack on company A and Eliott Leland's subsequent orders, he describes them as "smaller, Godzilla-like creatures" (ゴジラ派生の小型生物).

The flying-type Servum has a thin, dark blue body with bumpy skin. It possesses two dragon-like wings on its back, which is lined from head to tail with pointed spikes. The Servum also possesses two thin hind legs and very small arms. The Servum's head sits atop a long neck, and has a long snout with a tooth-filled mouth. The Servum possesses multiple red eyes. An individual giant flying-type Servum much larger than the others appears exclusively in the GODZILLA: Planet of the Monsters manga adaptation.

The worm-type Servum is considerably smaller than its flying brethren, and true to its name resembles a large worm with many of the same physical traits as the flying-type, such as their skin texture and eyes. The worm-type Servum possesses numerous tentacular roots which it can manipulate through the ground to attack prey.

Servum are feral, aggressive creatures which prey on nearly anything in sight. Each variant of the species seems to cooperate in groups with other members of its kind to attack prey. Flying-type Servum are aggressive toward the smaller worm-type. However, the creatures submit to both Godzilla Filius and Godzilla Earth, often remaining in proximity to them. It is unclear if the flying-type Servum were attempting to aid Godzilla Filius in battle by attacking the Hover Bike squadron or simply attacked them of their own volition.

While Godzilla Earth and Godzilla Filius display intelligence, the Servum are primarily instinct-driven and their aggressiveness will often lead to many of them being killed by human troops or Mechagodzilla City.

The Servum is a "subspecies" of Godzilla, and one of the creatures that inhabits the Earth's ecosystem 20,000 years into the future.[3] The Servum is 97% genetically identical to Godzilla, and consists of at least two types: the flying-type and the worm-type.

When a team of humans arrived on the Earth 20,000 years after humanity abandoned the planet to Godzilla, one of their companies was assaulted by a group of flying-type Servum. The beasts were eventually defeated, but not before killing multiple crew members and wrecking the engines of some of the crew's Landing Ships, leaving them stranded on the planet. Martin Lazzari analyzed the carcass of a Servum, and determined that it was very similar to the strange new plant life on the planet, as both had evolved under the influence of Godzilla's DNA. Later, during the humans' desperate battle against Godzilla, a flock of flying-type Servum attacked the fleet of Hover Bikes led by Rilu-elu Belu-be and Adam Bindewald. The pilots were able to kill some of the Servum and evade the rest, and continued the battle against Godzilla.

After Godzilla was destroyed, a huge earthquake struck the Tanzawa Forest area, causing several nearby Servum to take flight. The source of this earthquake was none other than the original Godzilla, now grown to over 300 meters in height.

While trying to locate a downed Landing Ship, Haruo Sakaki began to cross a foggy marsh surrounded by the tentacles of numerous worm-type Servum. Miana telepathically warned him of the danger before he was attacked, and he was able to escape the marsh unharmed. Later, while Haruo was trying to reach the Landing Ship with the other surviving members of his team, Yuko Tani wandered off from the group after detecting the same signal and began walking through the marsh. She was immediately restrained by the worm-type Servum's tentacles, and screamed out for help. Haruo and the others arrived and began opening fire on the Servum with their rifles, while Miana and her twin sister Maina killed the creatures with their Nanometal arrows. After Haruo and Martin Lazzari helped Yuko out of the marsh, a flock of flying-type Servum descended to feed on the worm type Servum's carcasses. After noticing the humans, the Servum prepared to attack, only for a Multipodal Battery driven by Metphies to appear from the jungle and open fire on them. The artillery killed numerous Servum, while the others retreated.

After passing through a cavern to locate the source of Mechagodzilla's signal, Haruo's group was attacked again by two flying-type Servum. Suddenly, the creatures were skewered by two Nanometal spikes that erupted from the ground, then their carcasses were absorbed by Nanometal. Haruo and his team soon learned that the source of the Nanometal spikes was Mechagodzilla City, the result of Mechagodzilla's Nanometal reconstructing its development facility over 20,000 years. As they approached the City, they passed the Nanometalized carcasses of several more flying-type Servum.

When Ghidorah's arrival on Earth was heralded by storm clouds and lightning strikes, numerous flying-type Servum took flight and seemed to flee from the phenomenon. Once Godzilla Earth proved victorious and vanquished Ghidorah, flying-type Servum were seen flying around him.

The Servum can generate a strong electromagnetic pulse.

The flying-type Servum, true to its namesake, is capable of flight.

The worm-type Servum is capable of burrowing underground.

The flying-type Servum possesses armored metallic flesh, similar to Godzilla himself. They can withstand a limited amount of gunfire from human weapons, although sustained attacks can bring them down.

Worm-type Servum possess tentacular roots they can use to restrain prey.

Servum are critically weak to Nanometal, which can easily pierce their hides and fatally wound them, after which they are typically assimilated by the material. 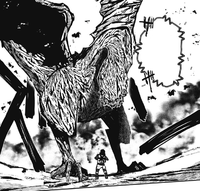 A giant flying-type Servum in GODZILLA: Planet of the Monsters Episode #5

A squad of United Earth soldiers came under siege by a swarm of Servum, but were able to repel them using a Powered Suit. However, a gigantic variant of the creatures appeared before Rilu-elu Belu-be. An injured soldier, who Belu-be had been helping get to safety, fell to the ground and was stomped on by the giant Servum, killing the man instantaneously. With the beast looming over Belu-be, it prepared to attack him but was knocked to the ground by a shot from a Multipodal Battery, piloted by Eliott Leland. As Leland remarked to the monster not to underestimate him, he fired several more blasts, dealing massive damage and prompting the Servum to attempt to flee. A nearby Landing Ship charged up for a blast, however, and killed the monster overhead with one piercing shot. The giant Servum then crashed to the ground, with a large hole straight through the center of its carcass.

This is a list of references for Servum. These citations are used to identify the reliable sources on which this article is based. These references appear inside articles in the form of superscript numbers, which look like this: [1]

↑ back to top ・ contents
Retrieved from "http://wikizilla.org/w/index.php?title=Servum&oldid=150059"
Categories: