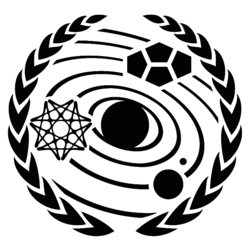 The United Earth (地球連合,   Chikyū Rengō, lit. Earth Alliance) is a military alliance between the human race and the Exif and Bilusaludo aliens featured in the 2017 Godzilla film, GODZILLA: Planet of the Monsters. It was initially formed to combat Godzilla, then led the evacuation of Earth to Tau-e aboard the Aratrum in 2048 after all attempts to defeat Godzilla failed.

After conditions on Tau-e were found to be uninhabitable by humans, Haruo Sakaki organized a return expedition to Earth in order to reclaim the planet from Godzilla. Several United Earth forces traveled aboard the Aratrum back to Earth, only to find that 20,000 years had passed and the planet's ecosystem had changed drastically.

↑ back to top ・ contents
Retrieved from "http://wikizilla.org/w/index.php?title=United_Earth&oldid=155965"
Categories: