Avant Gamera (アヴァンガメラ,   Avan Gamera) is a giant turtle kaiju who appeared in the 2006 Kadokawa film, Gamera the Brave.

A huge turtle, Gamera suddenly appeared in the fishing village of Shima in 1973 to save its inhabitants from a flock of man-eating bat-like creatures called Gyaos. Gamera found himself outnumbered and outmatched and was forced to self-destruct in order to eliminate the Gyaos and defend the village. Despite seemingly sacrificing his own life, Gamera actually expelled his energy and allowed himself to be reincarnated through an egg 33 years later. When the reincarnation of Gamera hatched, he was raised by a young boy named Toru Aizawa, who named him "Toto."

To distinguish this version of Gamera from his reincarnation, he is designated "Avant Gamera," referring to his status as the "original" Gamera.

Avant Gamera possesses light brown skin, in stark contrast to the greenish-blue skin of previous incarnations of the character. Gamera's head is relatively large, as are his eyes which are green. Gamera's teeth are very small, save for the two gigantic tusks on his lower jaw. These tusks jut out noticeably from Gamera's mouth, with his right tusk being broken. Avant Gamera has a noticeable overbite, with his lower jaw not extending forward very far. His arms and legs are covered in spikes, while his hands and feet each possess five digits with long claws. Gamera's shell is composed of ridged plates which extend partially beyond the width of his body.

Avant Gamera is a benevolent creature who selflessly intervened to defend the citizens of Shima from a Gyaos attack, even going so far as to sacrifice his own life to stop the monsters.

Avant Gamera's origins are shrouded in mystery, as he simply appeared in 1973 and completely vanished after self-destructing. He is noted to resemble a gigantic turtle, but the specifics of what kind of creature he is remain a mystery. Humanity's knowledge of Avant Gamera's ability to fly indicates that the battle in Shima was not their first encounter with him; Gamera is never depicted flying in his appearance in Shima, and instead arrives from the sea in both the manga and novelization.

Avant Gamera in Gamera the Brave

In 1973, the Japanese fishing village of Shima came under attack by a flock of four giant man-eating winged creatures called Gyaos. The inhabitants tried fleeing to safety, and it looked as if their village would be destroyed by the creatures. However, Gamera suddenly appeared from the nearby forest and killed one of the Gyaos with a fireball. The remaining three promptly attacked Gamera, striking him with their supersonic scalpel and knocking him to the ground. The Gyaos set upon the downed Gamera, biting and tearing off his flesh. Gamera began to glow bright red and generate intense heat. Just as the Gyaos realized what was about to happen, Gamera self-destructed, killing himself and all three Gyaos in a fiery explosion. However, Gamera's sacrifice had saved Shima, and the villagers rejoiced.

Following Gamera's sacrifice, strange red pearls were discovered around the village, which became a popular tourist item and helped boost Shima's local economy and put it on the map. Since many believed the pearls were connected to Gamera somehow, it was believed he had saved Shima in more ways than one. The Japanese government formed a task force for the investigation of monsters in the wake of Gamera's battle with Gyaos, and began gathering these pearls over the ensuing decades. By 2006, the monster task force was on the verge of being shut down due to a lack of any monster activity since 1973. However, Toru Aizawa, the son of a man who had actually witnessed Gamera's battle with Gyaos as a boy, discovered a turtle egg atop a mysterious red rock on a small island near Shima. Toru raised the turtle which hatched from the egg, naming it Toto. As the turtle grew rapidly and demonstrated unusual abilities such as flight and the ability to breathe fire, it became clear that Toto was actually the reincarnation of Gamera. Toto defended Shima from Zedus, a sea monster mutated by feeding on corpses of Gyaos, but was seriously injured in the battle. The government captured Toto and infused him with the energy extracted from the pearls the original Gamera had left behind, helping him grow larger and fight Zedus in a second battle in Nagoya. Toto finally triumphed over Zedus after absorbing the stone on which his egg had been found, and the new Gamera flew off over the horizon.

Avant Gamera can spit fireballs (火球,   kakyū) which are highly incendiary and deadly toward other monsters. This ability was utilized to kill one Gyaos during Gamera's 1973 battle against the creatures. His aim is impeccable in the version of the battle included in the tie-in manga Gamera 2006: Hard Link, with all four fireballs he shoots hitting a Gyaos. In the novelization Friends: Gamera the Brave, a sonic ray from a Gyaos slices off his lower jaw, leaving him unable to use this wepaon.

Gamera self-destructs to eliminate the Gyaos.

When overwhelmed in combat and left with no other option, Gamera can cause himself to self-destruct (自爆,   jibaku). Gamera overloads his internal furnace with fireballs until he begins to glow bright red and finally explodes, destroying everything in close proximity. Gamera used this self-destruction when overwhelmed by a flock of Gyaos, successfully destroying all three of them along with himself.

Toto, the reincarnation of Gamera, hatches from his egg.

Gamera's life does not end after self-destructing, however, as in the act of exploding he releases his internal energy which is then collected in numerous red pearls. After 33 years, Gamera was reincarnated through an egg which appeared atop an ornate red stone. This egg hatched into a turtle which was named "Toto" and raised by Toru Aizawa, and quickly grew into Gamera. Toto's growth was not complete until he had reabsorbed all of the energy Avant Gamera had released, which was accomplished by a transfusion of energy extracted from the red pearls followed by Toto consuming the rock on which his egg was found.

Although neither Gamera the Brave nor Gamera 2006: Hard Link depict Avant Gamera flying, a webpage which Mai Nishio shows to Toru Aizawa briefly mentions that Gamera is known to fly.

In the Gamera 2006: Hard Link manga, Avant Gamera finishes off a charred Gyaos by stepping on its head. Later in the battle, he hurls a Gyaos to the ground even as it blasts him with its supersonic scalpel.

In Gamera the Brave, Avant Gamera loses his footing after the Gyaos fire their supersonic scalpels at his shoulders and is quickly overwhelmed by them. Whereas in the manga, he endures dozens of rays powerful enough to pierce his chest and exit through his shell, only resorting to self-destruction when a Gyaos is in the process of ripping his throat out.

Humanity created a 99% accurate mimic of Gamera's DNA and confirmed throughout various tests that Gamera's DNA itself is a powerful counter against Gyaos' DNA. They infused this DNA into his reincarnation, Toto, in order to give him the strength to defeat Zedus. 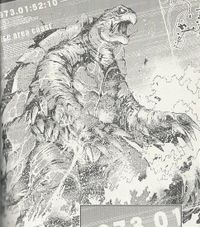 This tie-in manga for Gamera the Brave shows a longer, bloodier version of Avant Gamera's battle against the Gyaos in 1973, while also providing more context for their fight.

That year, a number of Original Gyaos attacked many urban areas over Japan and caused severe damage to the nation. The JGSDF lost 17% of its forces attempting to combat them. After arriving to defend the village of Shima, Gamera was attacked by five Gyaos' supersonic scalpels. Gamera shot the first Gyaos to charge him with a point-blank fireball, then killed it by stomping on its head. The three remaining Gyaos kept firing at Gamera, but he retracted into his shell and charged up a fireball which he launched at one of the Gyaos. Another Gyaos flew in and bit Gamera's arm, but Gamera threw it to the ground and killed it with a fireball. The two remaining Gyaos hovered about, and Gamera spat another fireball at them. From the smoke, one Gyaos flew toward Gamera and unleashed a flurry of beams. Gamera threw it to the ground, but the Gyaos continued its onslaught as the other Gyaos flew toward Gamera. Gamera began spurting blood as the two Gyaos feasted on his entrails. Gamera, acknowledging he had been defeated, triggered his self-destruction, killing himself along with both Gyaos.

After the battle, the Japanese government embarked on an expensive, 10-year project to recover the remains of Gamera and the Gyaos. Though its 100,000 employees found over 60,000 Gyaos samples, they were unable to locate a single cell or piece of skin from Gamera. Since the government was unable to confirm Gamera's death, it kept its anti-kaiju section (巨大生物対策審議会) funded for another 33 years, despite no further monster sightings during that time, but eventually decided to shut it down and concluded that gigantic monsters no longer existed.

After the incident, humanity launched a project to create a virtual model of Gamera's DNA and spent 22 years with the world's leading scientists. Using a large number of supercomputers to establish a pseudo-Earth-environment in the underground facility in Yokohama and the red pearls which appeared in Shima following Gamera's death, humanity managed to mimic the DNA of Avant Gamera with 99% accuracy to assist the growth of Toto, his reincarnation. Seeing the overwhelming outcome of the project, one of the 12 scientists was utterly "shocked" and was reported to have committed suicide.

This is a list of references for Avant Gamera. These citations are used to identify the reliable sources on which this article is based. These references appear inside articles in the form of superscript numbers, which look like this: [1]

8 months ago
Score 1
Probably the ugliest looking Gamera design, which is a relief since it appears for no more than five minutes and reincarnates into a much cuter Gamera.
Permalink
You are ignoring the author of this comment
Show comment | Manage ignore list

6 months ago
Score 1
I'm a fan since Showa series, and Avant Gamera has one of my favorite designs of all.
Permalink
Retrieved from "http://wikizilla.org/w/index.php?title=Avant_Gamera&oldid=147127"
Categories: