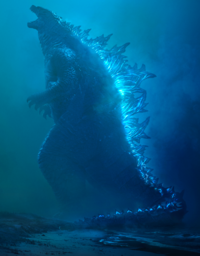 Godzilla is the most popular example of a kaijū

Kaiju (怪獣,   kaijū) is a Japanese word that literally means "strange beast" and is usually translated as "monster" in English. Traditionally, kaiju can refer any sort of strange creature, but in recent times the word has become associated with a genre of tokusatsu entertainment, specifically Japanese cinema that involved giant monsters. The most powerful kaiju are at times advertently referred to as daikaiju (大怪獣,   daikaijū) the prefix dai- emphasizing great power or status and is usually translated as "giant monster."

Kaiju are typically modeled after conventional animals, mythological creatures, and sometimes even plants; however, there are more exotic examples. Choujin Sentai Jetman features monsters based on traffic lights, faucets, and tomatoes; Kamen Rider Super-1 includes a whole army of monsters based on household objects such as umbrellas and utility ladders. While the term kaiju is used in the West to describe monsters from tokusatsu and Japanese folklore, monsters like vampires, werewolves, Frankenstein's Monster, mummies and zombies could fall into this category (Frankenstein's Monster was once a daikaiju in the film Frankenstein vs. Baragon, which was produced by Toho). Kaiju are sometimes depicted as minions serving a greater evil. Some kaiju are elite warriors which serve as the right-hand man to the greater villain and are destroyed by the heroic forces. Others have a neutral alignment, only seeking to destroy buildings and other structures. During the early eras of tokusatsu, "heroic" monsters were seen in daikaiju eiga films, and it wasn't until later when television tokusatsu productions began using kaiju which aided the hero, saved civilians, or demonstrated some kind of complex personality. These kaiju adopted many classic monster traits, appearing as the "misunderstood creature."

In the films of Legendary Pictures' MonsterVerse, kaiju are referred to in English as Titans. According to Michael Dougherty, director of Godzilla: King of the Monsters, the "Titan" is a translation of "kaiju" and the terms are synonymous and interchangeable,[1] as supported by the Japanese translation's use of "kaiju" in reference to the Titans. The organization Monarch classifies unidentified Titans as Massive Unidentified Terrestrial Organisms (MUTOs), before they receive official designations from Monarch and are denoted as Titans.[2] The two MUTOs which fought Godzilla in 2014 however never receive names of their own outside of the generic "MUTO" designation.

Kaiju are the extra-dimensional monsters that appear in the film Pacific Rim and its sequel, Pacific Rim Uprising. They serve the sapient inhabitants of their dimension and come through the portal at the bottom of the Pacific Ocean called the Breach.

The Kaiju are separated into categories like natural disasters, according to a system known as the Serizawa Scale. There are five categories:

This is a list of references for Kaiju. These citations are used to identify the reliable sources on which this article is based. These references appear inside articles in the form of superscript numbers, which look like this: [1]

8 months ago
Score 1
None of the Pacific Rim kaiju will be given pages here. They are all covered in depth by our affiliate, Pacific Rim Wiki.
Permalink
You are ignoring the author of this comment
Show comment | Manage ignore list

37 months ago
Score 2
Amazing!
Permalink
↑ back to top ・ contents
Retrieved from "http://wikizilla.org/w/index.php?title=Kaiju&oldid=156934"
Categories: