The game was followed by a sequel, Godzilla: Unleashed, in 2007.

"The planet is under siege… protect it from complete destruction as Godzilla, the towering titan of our time! Roam the earth battling notorious mega-monsters, an alien invasion and ongoing military attacks. Take your mammoth size and rage online to smash sworn enemies in a crushing display of melee madness. This is monumental, city-trampling action that kicks serious tail."

After failing to invade the Earth, the Vortaak return to Earth two years later with all of the monsters under their control, along with their ultimate weapon, SpaceGodzilla. The player assumes the role of a monster who has broken free of the control, regardless of what monster is picked.

The original story during development was much more elaborate, involving the Vortaak infiltrating human society to steal G-cells.

Action Mode is the game's primary story mode. The player selects a monster to play as, and must fight their way through various stages, each of which contains an enemy monster. The player will occasionally encounter Challenges Mode stages, which provide the player with bonus points if completed, but are not necessary to progress the story. Eventually the player will reach the final stage, the Vortaak Mothership, which typically features Orga as the final opponent.

If the player completes Action Mode on the hard difficulty with Godzilla 2000, a cutscene showing SpaceGodzilla's shoulder crystals shattering in the middle of a canyon will be played. The shattered remnants then temporarily coalesce into a miniature black hole that sucks SpaceGodzilla in immediately before the black hole fades out. Godzilla roars victoriously and the Vortaak flee the Earth.

Challenges Mode is a secondary game mode that consists of special stages where the player must complete some task. Unlike Action Mode stages, these stages are not all based on defeating the enemy monster, and may feature up to four different monsters at the same time. When playing through Action Mode, the player will occasionally enter a Challenges Mode stage, which after being completed will unlock it for play in the Challenges Mode menu. If the player successfully beats a Challenges Mode stage, they will earn points to spend at the in-game store. When these stages are encountered in Action Mode, the player will control whichever monster they are using for the rest of the mode, while if they are selected individually in the Challenges Mode menu, the player will automatically play as Godzilla 2000. The only exception is the "Asteroid Field" challenge, where the player plays as MOGUERA This game mode is notable for featuring some monsters as bosses that are not themselves playable in the game, such as Ebirah, the Millennian and SpaceGodzilla's flying form.

The various challenges and their in-game descriptions are as follows:

Versus Mode is a gameplay mode where the player can initiate a custom 1-on-1 battle as and against the monster of their choosing. The player will have access to all monsters and stages they have unlocked prior. The time limit and number of rounds for each battle can be customized. This mode can be played against the AI or a second player.

Similar to Versus Mode, Melee Mode allows the player to set up custom battles using the monsters and stages of their choosing. However, Melee Mode gives the option of including up to four monsters. The player has the option to make the match a free-for-all or team battle, and can choose between making it be decided by knockout, combat points, or destruction points. The destruction option is similar to the "Destruction Mode" from Godzilla: Destroy All Monsters Melee, where the player competes against the other monsters to score as many points as possible. Like Versus Mode, this mode can be played with one or two players.

Survival Mode is a single-player, single-stage (of the player's choice) gameplay mode in which the player must defeat as many opponents as possible before their monster's health is completely diminished. Each opponent must be defeated within a three-minute time limit or the match is automatically over. The player's score is based on how many monsters in a row are beaten and how quickly they were defeated. The player monster's health bar is partially replenished after certain matches, but the amount of health received gradually decreases the further one progresses.

Each monster in Survival Mode faces its opponents in a different order and they are as follows:

This menu allows the player to use store and spend points they have earned in the other game modes to purchase new playable monsters, stages for Versus and Melee Modes, gallery items, or stills and concept art for Godzilla: Final Wars. This menu includes a variety of items bundled in packages with question mark icons that are found in green, yellow, and red colors. Purchasing a pack will award the player a single preselected character or stage and will give them the option to purchase others in the pack at an additional cost.

The items that can be purchased in this menu, as well the requirements and cost for buying them, are as follows:

The Gallery is a collection of concept art and production images for Godzilla: Save the Earth. Gallery items can be purchased from the in-game store using points earned from other game modes.

Similar to the Gallery, this menu consists of concept art and stills from the then-upcoming Godzilla film, Godzilla: Final Wars. They can be purchased in the in-game store using points earned from other game modes.

The full character select screen after all of the playable monsters have been unlocked.

Godzilla: Save the Earth features a total of 19 playable monsters; six that are available from the start and 13 that must be unlocked by purchasing Monster Packages.

Each playable monster has four alternate colors associated with them. These can be seen only in Melee Mode when multiple players select the same character. Player 1 will be colored blue, Player 2 will be colored green, Player 3 will colored orange, and Player 4 will be colored red. 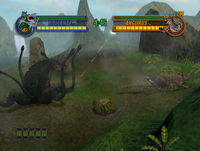 Biollante in Godzilla: Save the Earth

Godzilla: Save the Earth features a total of 16 different fighting stages, including 9 standard sized arenas and 7 smaller, sub-arena variations. Most of the stages in the game have options for switching between day and night settings. 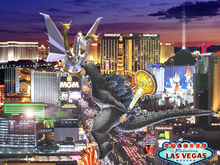 Many of the game's proposed elements were abandoned during production, due to a combination of time constraints and licensing issues. This was possibly due to Atari rushing the game in order to coincide with the release of Godzilla: Final Wars in 2004. Biollante was scrapped prior to release despite being fully completed and the majority of the game's story was cut, even though a considerable amount of time was spent on the story mode. Simon Strange stated that it wasn't the "feel good" project that Godzilla: Destroy All Monsters Melee was. There was originally going to be a robust tokens system, but it was eventually cut. Most of the cut-scenes were deleted along with the story, and the special effects for Anguirus' roar were changed.[9]

Main article: Godzilla: Save the Earth/Gallery.

Main article: Godzilla: Save the Earth/Videos.

This is a list of references for Godzilla: Save the Earth. These citations are used to identify the reliable sources on which this article is based. These references appear inside articles in the form of superscript numbers, which look like this: [1]

↑ back to top ・ contents
Retrieved from "http://wikizilla.org/w/index.php?title=Godzilla:_Save_the_Earth&oldid=170975"
Categories: