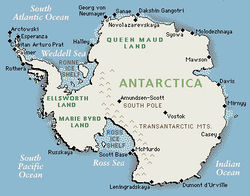 Antarctica is the least populated and coldest continent on Earth, with temperatures sometimes reaching below -100 degrees Fahrenheit or -73 degrees Celsius. It is featured in several giant monster films. 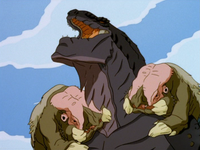 Ice Borers attacking Godzilla in Antarctica in the Godzilla: The Series episode "Freeze"

Decades ago, the Gotengo engaged Godzilla in Antarctica. Godzilla shot down the ship with his atomic breath and prepared to destroy it once and for all. A crew member, Douglas Gordon, fired a barrage of missiles that created an opening in the ice shelf, causing Godzilla to fall into it. The Gotengo then blasted a nearby mountainside, causing Godzilla to be buried deep underneath tons of ice. Area G was established in Antarctica to contain Godzilla, and was where the King of the Monsters remained dormant for decades.

In 20XX, when the Xiliens launched their full-scale invasion of Earth, the remaining members of the Earth Defense Force, led by Gordon, brought the Gotengo to Antarctica to free Godzilla in a desperate attempt to defeat the Xiliens' army of monsters. When the Controller of Planet X learned about this plan, he sent Gigan to destroy the Gotengo. Gigan attacked the ship, but was unable to stop it from firing a missile and freeing Godzilla from the ice. Godzilla emerged and battled Gigan, blasting the cyborg's head off with his atomic breath. Believing his battle with the Gotengo was still going on, Godzilla followed the ship out of Antarctica and traveled around the world, defeating the Xiliens' mind-controlled monsters one by one.

When Monarch discovered a three-headed superspecies sealed beneath the Antarctic ice sheet, Dr. Vivienne Graham led the effort to build a covert containment and research facility around the dormant creature.[1] Monarch gave the creature the name "Monster Zero," and the Titan designation Titanus Ghidorah.

This is a list of references for Antarctica. These citations are used to identify the reliable sources on which this article is based. These references appear inside articles in the form of superscript numbers, which look like this: [1]

↑ back to top ・ contents
Retrieved from "http://wikizilla.org/w/index.php?title=Antarctica&oldid=174191"
Categories: