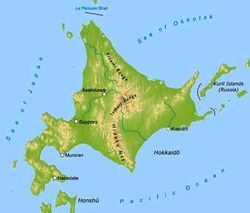 A map of Hokkaido

Hokkaido (北海道,   Hokkaidō) is one of the prefectures of Japan. It is one of Japan's largest islands, and constitutes the largest and northernmost of all of Japan's prefectures. It is featured in several Godzilla films.

After Godzilla defeats Anguirus and devastates Osaka, Shoichi Tsukioka and Koji Kobayashi travel to their company's Hokkaido branch to find work. Shortly after settling in, they notice that Godzilla has attacked the company's fishing boats as he headed north along the coast of Japan.

During his southward approach to Japan after his escape from the iceberg, Godzilla is assumed by the authorities to have destroyed the ship Shinsei Maru No. 2 en route to the Port of Hakodate in the waters off Hokkaido.

After defeating King Ghidorah for the first time, Godzilla travels most of the length of Japan to Sapporo, Hokkaido's main city. There, he goes on a rampage, tearing down Sapporo Tower and sending people scattering. The JSDF arrive with a squadron of MBT-MB92s, but Godzilla soon destroys them, and heads for the sea to travel back to Tokyo.

Mothra Leo battles Desghidorah in Hokkaido in Rebirth of Mothra

A logging company working in a Hokkaido forest removed the seal containing the alien monster Desghidorah. The evil fairy Belvera soon stole the seal and used it to awaken the monster, who began to burn the forest and absorb its energy. Mothra soon arrived to stop him, but she was in a weakened state after laying Mothra Leo's egg. Soon after, Leo soon hatched and came to his mother's defense. In the end, they had to retreat, with Mothra carrying Leo out to sea. She died from her injuries, sinking into the depths.

While Mothra Leo spun a cocoon, Desghidorah sprouted wings and took to the skies. After emerging in his imago form, Leo returned to Hokkaido to face the dragon. This time, the moth had a clear advantage. After sealing Desghidorah back into the Earth, Leo restored the ravaged forest to its original state.

The mummified corpse of Gigan is found by Earth Defense Force scientists in a cave in Hokkaido.


↑ back to top ・ contents
Retrieved from "https://wikizilla.org/w/index.php?title=Hokkaido&oldid=181121"
Categories: