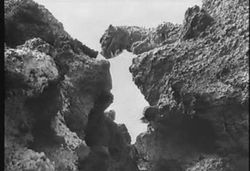 Iwato Island (岩戸島,   Iwatojima) is an fictional uninhabited island in the Pacific Ocean that appeared in the 1955 Godzilla film, Godzilla Raids Again.

While scouting the ocean for fish, the engine on pilot Kojikawa Kobayashi's plane began to fail, and he was forced to make an emergency landing on Iwato Island. His friend and coworker, Shoichi Tsukioka, was alerted and flew to the island to help his friend. Tsukioka spotted Kobayashi's plane in the water just off the island, and saw Kobayashi standing on the shore waving to him. Tsukioka landed and reunited with Kobayashi, but the two were startled by a deafening roar. Suddenly, the island began to shake and rocks fell from the cliffs above. As they ran for cover, Tsukioka and Kobayashi caught a glimpse of two gigantic monsters battling on the island, one of whom Tsukioka recognized as Godzilla, the other being the monster Anguirus. Godzilla and Anguirus battled briefly, and eventually tackled each other into the ocean and disappeared, allowing Tsukioka and Kobayashi to escape the island and report what they had seen to the authorities in Osaka.


↑ back to top ・ contents
Retrieved from "http://wikizilla.org/w/index.php?title=Iwato_Island&oldid=151960"
Categories: