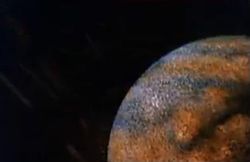 In Zone Fighter it is not explained where Peaceland is, other than it is near the other fictional planet in the show, Garoga. The Garogas from the neighbouring planet to Peaceland attack and kill every single Peacelander on the planet besides the Zone Family, who travel to Earth with the Garogas in hot pursuit. The planet is then later destroyed.


↑ back to top ・ contents
Retrieved from "http://wikizilla.org/w/index.php?title=Planet_Peaceland&oldid=151432"
Categories: