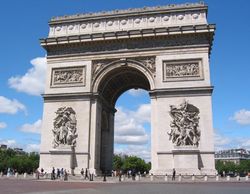 The Arc de Triomphe de l'Étoile is a famous landmark in Paris, France. It was built to commemorate the victory of France over Russia in the early-1800s. The Arc de Triomphe is featured in the 1968 Godzilla film, Destroy All Monsters.

Gorosaurus destroys the Arc de Triomphe in Destroy All Monsters

After being mind-controlled by the Kilaaks, Gorosaurus attacked Paris, burrowing through the ground. He surfaced almost exactly next to the Arc de Triomphe, and it collapsed as he climbed out of the ground. 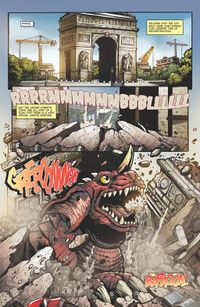 Baragon surfaced in Paris underneath the Arc de Triomphe, destroying it. The Counter-Kaiju Reaction Forces deployed Kiryu to stop Baragon. After a fierce battle, Kiryu subdued Baragon and airlifted him to the Monster Islands.


↑ back to top ・ contents
Retrieved from "http://wikizilla.org/w/index.php?title=Arc_de_Triomphe&oldid=128275"
Categories: