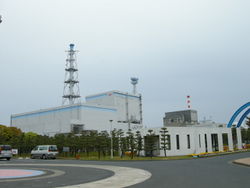 The Tōkai Nuclear Power Plant  (東海原子力発電所,   Tōkai Genshi-ryoku Hatsuden-sho) is the first commercial nuclear power plant that was built in Japan, built to the British Magnox design. Located in the village of Tokai in Ibaraki Prefecture, it is now inactive, and awaiting decommissioning. It is featured in the films Godzilla 2000: Millennium, and Godzilla vs. Megaguirus.

After attacking Nemuro, Godzilla appeared in the sea heading directly toward Tokai, meaning he was likely going after the nuclear plant there. Crisis Control Intelligence lieutenant Mitsuo Katagiri ordered that the Tokai plant be shut down in anticipation of Godzilla's arrival. The JSDF placed forces on the beaches outside of Tokai, including new patented Full Metal Missile Launchers, which were designed specifically to pierce Godzilla's skin. Godzilla came ashore, and was bombarded by the JSDF's full playload, but continued toward the nuclear plant as if unaffected. Finally, Godzilla reached the last line of defense, the Full Metal Missile launchers. The missiles were fired at Godzilla, and actually managed to cause him minor physical harm. As Godzilla roared furiously, a giant floating rock appeared overhead and floated in front of Godzilla. The rock fired a powerful laser cannon at Godzilla, knocking him down. Godzilla got back up and fired his atomic breath at the rock, blasting off some of its rocky exterior and revealing metal underneath. The UFO responded by firing its laser cannon at Godzilla again, knocking him into the ocean. The UFO then flew away.

Godzilla attacks the Tokai Nuclear Plant in Godzilla vs. Megaguirus

In 1966, Godzilla appeared for the first time since annihilating Tokyo in 1954. He came ashore at Tokai and attacked the nuclear power plant, absorbing radiation from its reactor. This attack prompted Japan to abandon nuclear power altogether, out of fear that it would prompt Godzilla to return again one day.

In 1999, Joseph Brody, a nuclear technician at the Janjira Nuclear Power Plant in Japan, detected a consistent tremor pattern gradually approaching the plant. Hayato, one of the workers at the plant, informed him that all other nearby nuclear power plants, including the Tokai Nuclear Power Plant, were not reporting similar tremors, which were presumed to be aftershocks from the recent earthquake in the Philippines.


↑ back to top ・ contents
Retrieved from "http://wikizilla.org/w/index.php?title=Tokai_Nuclear_Power_Plant&oldid=138434"
Categories: