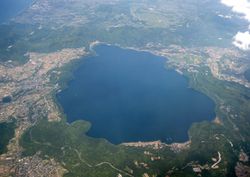 A group of teenagers disturbed Mothra's shrine after robbing a convenience store near Lake Ikeda. Mothra awakened and pulled the teenagers underwater, wrapping their bodies in a cocoon of silk. Mothra then encased herself in a cocoon which sat on the lake's surface. Groups of people began to congregate around the lake, observing and sometimes praying to the strange cocoon. Eventually, as Godzilla approached Yokohama, the cocoon split open and Mothra emerged in her imago form before flying off to confront Godzilla.


↑ back to top ・ contents
Retrieved from "http://wikizilla.org/w/index.php?title=Lake_Ikeda&oldid=156080"
Categories: