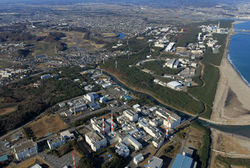 Tōkai (東海村,   Tokai-mura, lit. Tokai Village) is a large village in Ibaraki Prefecture, Japan. It is famous for its Nuclear Power Plant, the first of its kind to be built in Japan, although it is currently being decommissioned after the damage caused by the 2011 Tohoku earthquake and tsunami. The town and its power plant both appear in the 1999 Godzilla film, Godzilla 2000: Millennium and the 2000 Godzilla film Godzilla vs. Megaguirus. The village is also featured in the 2004 film Godzilla: Final Wars, in which it is attacked by Ebirah.

Godzilla came ashore at Tokai in order to feed on the reactors at its nuclear power plant. The JSDF engaged Godzilla outside of the village, using helicopters, tanks, fighter jets, mines, and their new Full Metal Missile Launchers. Godzilla was mostly unfazed by the military's attacks, although the Full Metal Missiles stopped him in his tracks. However, he was suddenly confronted by a giant floating rock, which blasted Godzilla back into the ocean with a laser cannon fired from its side.

After leaving Tokyo in ruins in 1954, Godzilla returned to Japan in 1966 to attack the country's first nuclear power plant in Tokai. The government concluded that Godzilla has been drawn by the nuclear reactors, and a ban on nuclear energy was subsequently imposed. Over the ensuing decades, Japan struggled to find a new alternative energy source to replace nuclear power, and would not experience a breakthrough in the form of plasma energy until the 1990's.

The Xiliens sent Ebirah to attack the Tokai Petrochemical Complex as part of a worldwide monster assault. After crushing several Type 90 Tanks, he was nearly killed by a squad of five Earth Defense Force mutant soldiers including Shinichi Ozaki and Katsunori Kazama. Before Kazama could finish Ebirah off, an Xilien UFO arrived to teleport him away in a ruse to earn humanity's trust.

↑ back to top ・ contents
Retrieved from "http://wikizilla.org/w/index.php?title=Tokai&oldid=138400"
Categories: